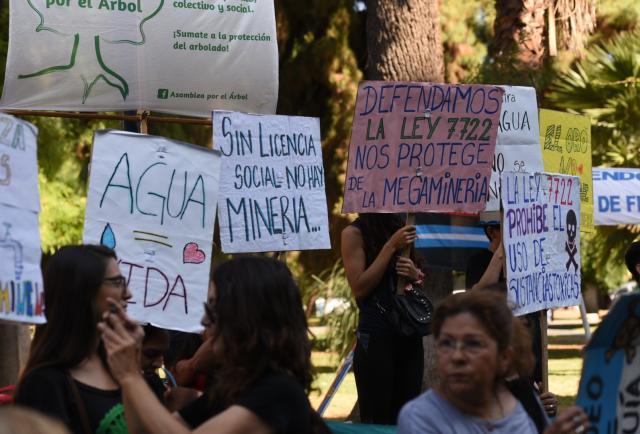 Eduardo Sosa He was an official of the government of Alfredo Cornejo but he is one of the standard bearers in defense of law 7722. He left the Ministry of Environment annoyed by the extractive policy of the Executive, which at the end of 2017 promoted the practice of fracking in the southern province . In dialogue with MDZ Radio he recognized "the honesty" of Rodolfo Suarez sincere in the campaign his intentions to develop mining but regretted that it is still necessary to explain why we should not reform law 7722.

"The mere fact that this law is subject to questioning and that it is necessary to explain that reforming it is bad is worrying," he said and said that "we must be vigilant" because some sectors "do not understand" what the Society has said and The Supreme Court

"I believe that the mining sector presses, intercedes, tries to influence because it wants to be better. It is reasonable. But both officials, as legislators and businessmen from different sectors are involved in the idea that metal mining is the salvation of Mendoza. I think it's the opposite, "Sosa argued.

Specifically, he said that false truths have been built around mining and the supposed benefits that it would bring to the province.

First, he questioned those who argue that mining will generate work for Mendoza. "The generation of employment is an argument that is heard, but if we see the unemployment rates of Mendoza compared to that of the mining provinces, we see that we are better off without mining," he said. "In those provinces where mining was in the same dress to generate employment, there were no improvements in the indexes," he argued.

But at the same time, he added that in case of generating employment it is hardly for local citizens, since it demands highly qualified labor. "All mining projects reach the end of their useful life and when that happens, ready and experienced workforce is available. If Mendoza opens the door to mining, companies will hire out highly trained personnel, because here they do not they worked on qualifying personnel, "he said. "That is why it is a liar to talk about employment and investment," he said.

At the same time, he denied that the approval of the Environmental Impact Statement in the Legislature is a mistake. "The Legislature gives political endorsement to a highly questioned activity. It does not mean that the legislator must meddle in the technical issue, but if he endorses it politically," he said and gave as an example the case of water concessions granted by Irrigation and the need that they be approved in the House of Laws.

On the other hand, he acknowledged that there are no activities that do not contaminate but said that the problem with mining is "the high environmental risk". "We must also recognize that it has improved its processes with new technology, but it is a high-risk activity because an accident such as that of San Juan or Brazil can happen. It is not about the amount of water used by mining, which is less than that used by agriculture. It is the potential of the mining activity to contaminate the rest of the water, "he explained.

Faced with the question of why the use of water in mining and fracking is questioned, and not in other activities that use larger quantities, Sosa said that in these cases "it is a preventive fight to avoid the consummate fact."

Looking ahead, Sosa remarked that they recognize that there is a legislative majority that seems determined to move forward with the reform of 7722, so "social protest will continue." "The law can be improved by regulating the elements that are already there and that can lead to some confusion. But also Indian Iron showed that mining projects can pass the filters when they comply with what the law requires them. Mining can be done without the use of toxic substances. You can do things well, like everything in life, what happens is that it is more expensive, "he concluded.