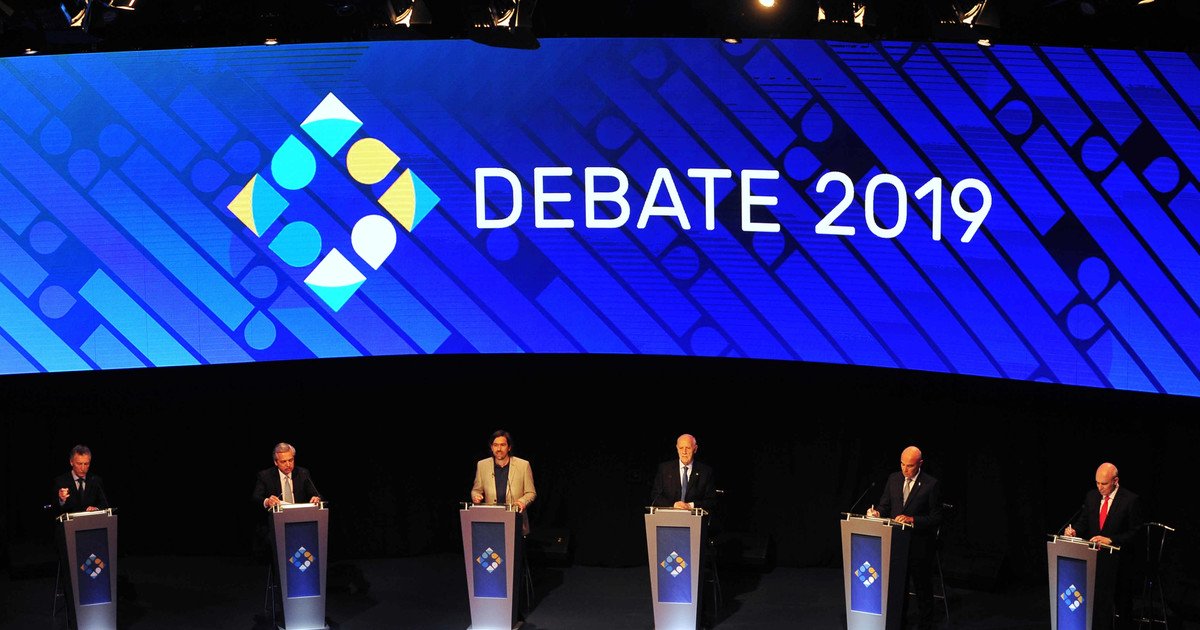 Sunday night was again stained with political proposals, crosses and chicanes, during the second presidential debate that takes place at the UBA Law School.

The candidates were following the modality of the debate, separated by themes other than the debate developed a week ago, and which privileges the expository over the crossings between them. Next, the best phrases of each:

Mauricio Macri "On this issue we are different from them. They despise the Security forces and transform Justice into a revolving door. We do not trade with drugs. We are with the victims of crime, we fight the mafias from the barracks to the drug trafficking. Drug traffickers are convicted in 13 days and it took 3 years before. "" After the election, Argentina will grow again. 1 million jobs have been created but many informal. The challenge is to continue generating formal employment of quality. To generate employment, the country must be developed and it must be connected and work done. "
"We have exported again, after 11 years, gas to Chile. I hope we take care of it."
"In the public work there is a matrix of corruption: the silver of the works was stolen. We generated a system of tenders on the Internet. One can go to the Roads page and see that for the price of a Kirchner highway, we make two. "
"When they govern, they believe they are the owners of the country's silver."
"Now the Kirchnerism speaks of federalism after prepoterating its own and others. It has not yet been voted in the City and they have already warned that they will take resources."
"From the first day I worked side by side with the workers. I think the future is going through the federal development of the country. They talk about the State, they left us a state without statistics, without controls and full of militants. Today we have a modern, electronic State , simplifying the procedures. "
"They tell us they want freedom of the press but at the same time they fantasize about a CONADEP of journalists." "It is outrageous to hear them talk about poverty, I don't believe them. Alberto Fernandez intervened in 2007 INDEC. They have always used the poor and have done clientelism. 35 years governing La Matanza and have not done a work.We really want to deal with and deal with poverty.The April crisis went back what we had achieved until 2017. We propose to give sewers to all Argentines. What we want is for them to be free and not part of a clientelist apparatus. "

Alberto Fernández "This week they dedicated themselves to talking about my index, which only marks errors and indicates misconduct … It would be good if they talked about other indexes: unemployment, poverty and inflation. Let's take care of the important thing."
"It is easy to hit what insecurity generates, talk about stronger penalties, but insecurity is directly linked to inequality. The most egalitarian societies have the least crime. Argentina has generated great inequality in these years. to rebuild social control. Those who commit crimes must be punished and justice must be relentless in that. "" Today, Argentina has the highest unemployment rate in the last 13 years. We have a President who thinks that work is a cost. He has closed the Ministry and always thought that the unemployed can become entrepreneurs. Those entrepreneurs are monotributistas who get on a bicycle and distribute pizzas. "
"Blank work is the best guarantee of social peace. We have lost a lot of work because the economy does not stop falling. 43 SMEs were closed per day. The installed capacity is only used by 60%."
"Don't run me with corruption, I can teach decency."
"Argentina claims to be a federal country but it is not."
"The institutional quality deteriorated much more. Macri said he was going to improve it, but what he did was to propose two judges by decree. He emptied a Federal Chamber. The reality is that corruption is a big problem. We must end businessmen. that corrupt and officials who are corrupted. "
"Today the 14-year-old boys, 1 in 2 was caught by poverty. But the most serious thing was how (the Government) multiplied hunger. We should be ashamed that in this country that produces 400 million inhabitants, we cannot feed 15 million who have been left helpless by the President's policies. "
"We are going to take care of our forests and we are going to ask mining to develop in a sustainable way. We need to give Argentines a home and we will build them."

Roberto Lavagna "The errors that are not recognized are the mistakes that are repeated. The people do not have infinite patience. The case of Chile shows it."
"Neither the easy trigger, the hard hand and the fascination of civil servants for weapons, but neither the flabby hand … As in the developed world, a fair and firm hand." "I think it is good to be honest from the beginning: none of the 3 axes (Employment, Production and Infrastructure) has a solution in a framework of the current economy, an employment program is needed to create 200 thousand new jobs and the challenge of 2 million jobs in a 4-year term. "
"Nothing is further than federalism than the process of permanent expansion of the Buenos Aires suburbs. A territorial rethinking of the country is required."
"You need a tax policy in favor of the interior, a credit policy in favor, you need infrastructure."
"The commitment to poverty must be total. The last two governments confused Social Development with the distribution of plans. Development is social integration and goes through that tripod of health, education and work. Work dignifies the human being. That mid-Argentina of the 70s with 4% poverty has been virtually erased from newspapers and a good part of the publications. There is no memory of a different country. Be careful to get used to it. "
Nicolás Del Caño "I want to echo the criticisms of this debate. I myself proposed that there be a real debate with questions and questions. I hope that today we will seriously debate, answer the questions and tell the truth."
"We have to take into account from where we started. The Police, Gendarmerie and Prefecture were involved in the dictatorship … Patricia Bullrich is responsible for the repression that ended with the deaths of Santiago Maldonado and Rafael Nahuel." "Every time I hear I confirm that Macri will never be able to understand what a working family suffers when they become unemployed. It leaves us with more than 2 million unemployed. We propose to divide the hours of work between employed and unemployed, reduce working hours. "
"Macri spent his time talking about transparency and under his Government a decree was issued to save his family from paying the debt they had with the State when they were handling the Mail and evading taxes. He put ministers like Aranguren who was President of Shell and that company filled their pockets while they punished the people with tariffs. He vetoed the laws of prohibition of dismissals and the one that limited the rates. "
"There is a pact to plunder our natural assets. In mining, companies take millions of profits and leave us the pollution of the rivers. In the previous government, the law on glaciers was vetoed. This government just assumed it took the retentions from miners. About Vaca Muerta, everyone tells us that Argentina's future is there but not a word says about the method used or the rights of the Mapuche communities. "

José Luis Espert "In the previous debate I told them that my competitors are responsible for what destroys you and me. They never want to change it. It's like a virus that is constantly mutating to reproduce and this virus is eating the roots of the Argentina. I am going to unmask this system. "" Argentine labor laws have not served to improve the situation of workers. We have ended up with rich and powerful trade unionists and with workers earning little and nothing. We have to decentralize collective bargaining. We will eliminate employer contributions. "
"Alberto Fernández never saw corruption in Kirchnerism?"
"On the one hand the corruption paradigm, as a candidate with 8 prosecutions. On the other hand, some degree of complicity with that corruption."
"Today the State is unsuccessful by definition: it has lost control of the territory and cannot enforce the law. The State lost its strategic role."
"We cannot continue to pay such a level of expenditure in public administration. They do not want to lower spending because they are the expense."
"We have to reformulate the pension system, leaving the grandparents within the distribution system but with a capitalization system within the State."
"30 years with stable poverty at 30%. To fight with poverty you need sustained growth."

Juan José Gómez Centurión "In the last week they talked about my use of time in the debate but not about my proposals. I don't come to be politically correct, I come to do what needs to be done."
"In Argentina, more and more drugs are produced, we have to end the narco in Argentina, kill the most vulnerable children through the paco. We will shield the border. We will organize an agency to fight organized crime. war must be won by whoever falls. "" There is an increasingly large state and a smaller society. "
"The great employer must be the production and not the State. We must end the habit of disguising unemployment with plans and public employment. Within the concept of labor reform, the first thing we think is to incorporate a plan to add 1 million employees in the labor market. "" Social Development should be the opposite of welfare. Developing society should be promoting employment and work. The increase in social plans parallels the impoverishment of Argentina. "