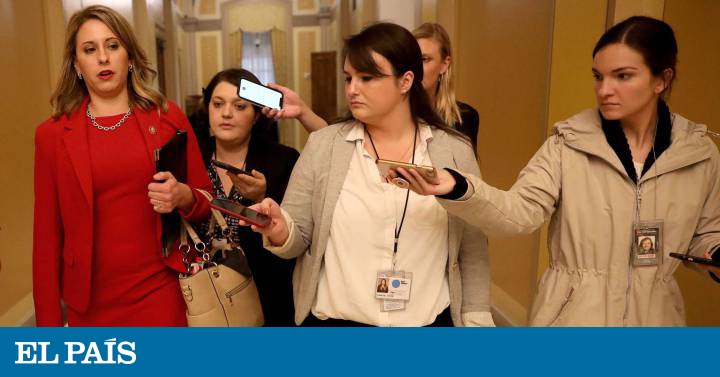 The young Democratic Congresswoman Katie Hill, who arrived at the Capitol in the legislative elections a year ago, delivered a bitter farewell speech on Thursday afternoon against the "misogynist culture" that, she explained, has led her to resign. Hill, 32, leaves the seat after being accused of sleeping with an employee of his campaign and a subordinate in Congress, and after the humiliating publication of photos and intimate messages. That derision has caused stupor in Washington. "I am leaving because there is a double standard, I am leaving because I do not want to be used as a currency," Hill said. "I'm leaving," he continued, "for a misogynist culture that happily consumed my nude photographs."

The California legislator admitted having sex with her campaign assistant, but denies those attributed to her with her legislative director, Graham Kelly. The Ethics Committee of the House of Representatives opened an investigation last week regarding the latter, as they are prohibited by the House of Representatives regulations, but Hill will not stay to see the result. The public exploitation of his intimate images, he explained Thursday, has been able to with her. The congresswoman attributes them to an operation of "pornovenganza" by her husband, from whom she is divorcing, and who has found the perfect allies in sensational and conservative means.

"I'm leaving because I don't want to be used by websites and blogs, operated by people without shame, for the dirtiest policy I've ever seen, and for the media on the right to achieve clicks and increase their audience by distributing intimate photographs that were taken without my consents to sexual entertainment for millions of people, "he said this afternoon at the Capitol. These materials were first disseminated by the conservative RedState and by the British tabloid Daily Mail.

The president of the Chamber, veteran Democrat Nancy Pelosi, criticized the abuse and exploitation that has led to the dissemination of these photographs, but did not question the congresswoman's decision to resign. Their relations with the employee of the electoral campaign, although they are not subject to the rules of Congress, also do not fit well, given their relationship of labor subordination, at a time like the current one, in which a greater awareness against harassment has reduced tolerance thresholds for these cases. "He has made his decision and he has chosen the moment," he said, although he found it a "sad" situation and called his "cyber-exploitation humiliation" shameful. "

Pelosi also took the opportunity to warn all those who "may be subject to such abuse and harassment." "I tell my children and my grandchildren, above all, all those appearances on social networks can then go hunting you out of context," he added.

Katie Hill did not post any of those photos or messages on social media. The congresswoman says that, from now on, she will turn to combat "pornovenganza". Even so, this Thursday, at the Capitol, he apologized: "For every girl who looked at me [as a reference], I hope you can forgive me."