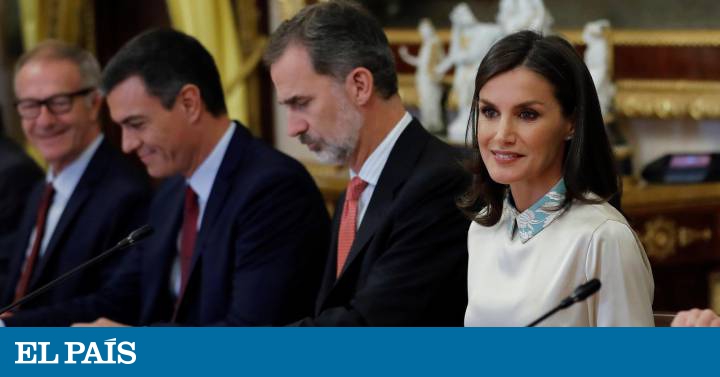 The Cervantes Institute wants to continue strengthening the presence of Spanish in the United States. As the director of the institution, Luis García Montero, told yesterday, the traditional act of presenting the yearbook Spanish in the world moves to the North American country: next October 11 it will be in New York, and then it will be repeated in Los Angeles – where a Cervantes headquarters will be opened soon – and in San Antonio (Texas). “We bet in favor of our language as a symbol of open, dialogic and democratic identity. As a way of being in the world today, ”he said before heading to the Royal Palace of Aranjuez to accompany the kings and the acting President of the Government, Pedro Sánchez, at the meeting of the board of the entity held on Wednesday.

The yearbook will also be presented in Madrid; It will be October 15 and will be attended by Pedro Almodóvar. “Among our priorities, as a State institution, is to defend the culture in Spanish in the world and also the image of Spain as an advanced, modern country, very well located at the forefront and fully democratic. Our creators are the ones who best represent that image, ”said García Montero. A defense that must be continuous throughout the world, also in Europe and especially in the context of Brexit. "We do not believe that it is necessary to dispense with English as a fundamental language, especially since Ireland and Malta defend it as their own, but we will take advantage of the situation to gain space," he said.

Hence, the Cervantes task needs an institutional unlocking to continue its work. In the draft General State Budgets of 2019 – which were not approved – a rise in his departure was planned after successive cuts in previous years: “Even so, we have met and improved figures,” said García Montero. Carmen Noguero Galilea, general secretary of Cervantes, showed them: “149,000 enrollments in the 86 centers present in 45 countries, an increase of 6.2% compared to 2018. 8.4% more candidates for DELE (diploma of Spanish as a foreign language) and 5.2% more courses ”.

King Felipe highlighted "the great common homeland" which is the Spanish language during lunch with the patrons at the Palacio de Aranjuez. Don Felipe provided that the generation to which the Princess of Asturias belongs inherits the legacy of the Pan-Hispanic language and culture. In order for this legacy to grow and strengthen, it required "the work and commitment of all."

Before half a hundred guests, among which were, in addition to Pedro Sánchez, the ministers, also acting, Education and Culture and Sports, Isabel Celaá and José Guirao, respectively, the King expressed his joy at presiding over an act that It revolves around one of the themes that most identify, unite and enrich those who have "the luck" to be part of that "common homeland" that form Spanish and "the cultural diversity that is expressed in this language."

“We are almost 600 million people on five continents who can communicate without borders with Spanish. We form a cross-cultural community whose demographic and geopolitical value has no discussion; and whose future will be defined based on the common horizons that we know how to create the 21 Spanish-speaking countries that constitute this territory of La Mancha, ”he said.

Felipe VI wanted to remember the “emotional act and of special significance for the Crown” that took place at the headquarters of the Cervantes Institute in October last year, in which Princess Leonor first read an article of the Constitution in public on the occasion of its 40th anniversary. "A Constitution that defines us as an open, democratic, diverse and solidly twinned society on the other side of the Atlantic," he said.