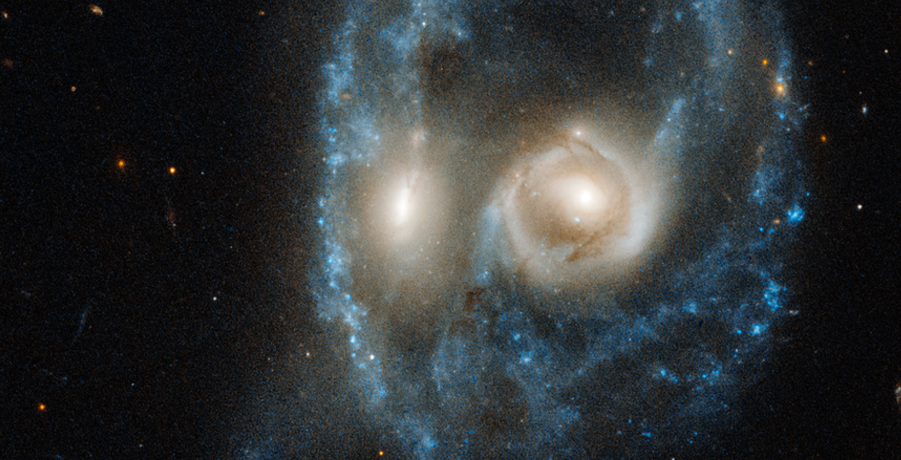 It looks like the face of a ghost or a being from another world that threatens us with huge bright eyes.

The Hubble telescope, from NASA and the European Space Agency (ESA), captured this image in space in June and spread it this week, as a message from the universe for Halloween.

“When astronomers look into the depths of space, they don’t expect to find something looking back at them,” says the NASA statement about the finding.

But the phenomenon photographed has nothing supernatural.

The image shows an interaction between two galaxies, but a very violent one: “A titanic frontal collision,” say NASA and ESA.

What Hubble captured belongs to the “Catalog of Associations and Peculiar Galaxies of the South”, prepared by astronomers Halton Arp and Barry Madore between 1966 and 1987, and was produced 704 million light years from Earth.

The catalog in which it is included was created to inventory thousands of unusual interactions between galaxies.

And, as the name implies, AM 2026-424 presents certain peculiarities.

The “eyes” of the “ghostly face” are the core of each galaxy.

Some rings of young blue stars and the gas and dust discs of the galaxies are what shape the face, nose and mouth of the “spectrum”, they explain from NASA and ESA.

Space agencies emphasize that while galaxy crashes are common in the formation of the universe, frontal crashes are not.

These brutal collisions give rise to the ring shape that this system has.

“Ring galaxies are rare; only a few hundred of them reside in our largest cosmic neighborhood. Galaxies have to collide in the correct orientation to create the ring,” they say from NASA and ESA.

Another “frequent” feature of the collision of galaxies is that a large collision with a smaller one and devour it, both agencies indicate.

But in this case, the similar size of the “eyes” of AM 2026-424 suggests that the galaxies are about the same size.

Astronomers estimate that this phenomenon will maintain its “spooky” appearance for “only” about 100 million years: “The two galaxies will merge completely in approximately 1,000 to 2,000 million years.”