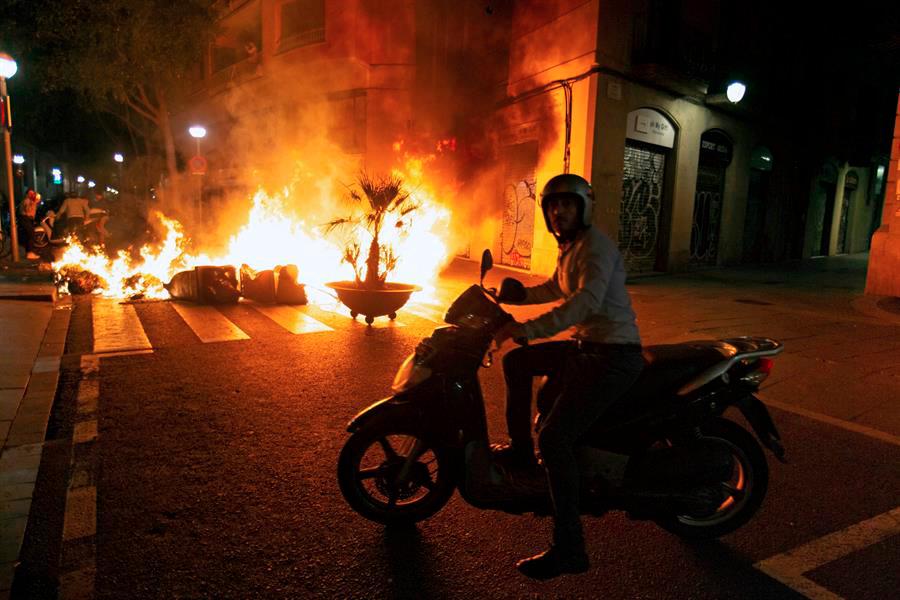 After the worst riots this week in Catalonia, the condemnation of radical independence violence showed on Saturday the deep political division between the Spanish Government and the Catalan regional authorities.

Friday night was the scene of the worst episodes of violent riots in Barcelona in several decades, with 152 wounded and serious episodes of urban guerrillas. In the entire region of Catalonia, northeast of Spain, there were 182 wounded, 18 of them police officers, and 54 arrested.

Today, however, the violent groups that have caused the chaos in the Catalan capital last nights have given a truce in a vindictive day and with moments of tension but without relevant disturbances, in which pacifist groups that have assembled cords for Separate police and protesters.

The Spanish Government denounced today the 'extreme' violence of the protests of these radical independence activists that have taken place in Catalonia in the last five days with hundreds of wounded.

Interior Minister Fernando Grande-Marlaska lamented in a press conference held in Barcelona the 'extreme virulence' and 'indiscriminate vandalism' and 'coordinated' of violent radicals, especially on the last night, when a police officer He was seriously injured.

The minister traveled to Barcelona today to discuss the situation with the head of the Interior in the Catalan regional autonomous government, Miquel Buch, and visit some of the 207 policemen of different bodies injured in hospitals during the five days of disturbances after the Court ruling Supreme against nine Catalan leaders for the illegal independence attempt of 2017.

The mayor of Barcelona, ​​Ada Colau, called for calm, because 'this cannot go on like this. Barcelona does not deserve this. '

The center of the Catalan capital has suffered extensive damage in five days of rampages and protests, which have included the blockade of the airport on Monday and a strike and mass demonstration on Friday.

To the economic damages is added the damage that the scenes of fires and confrontations cause to the image of the city, which received last year 14.8 million tourists and is an important center of international congresses and tourist cruises.

The president of the Catalan regional government, the independentist Quim Torra, today asked the head of the acting Central Executive, the socialist Pedro Sánchez, to set the date for a meeting in which to look for 'a political solution', in reference to the traditional demand of the independentista side of a referendum of self-determination.

Torra, in an institutional statement, also called for 'calm' and for the protests to be peaceful. "Violence will never be our flag," he said, although once again he eluded expressly condemning the altercations and riots since Monday.

The Catalan regional president tried to speak with Sanchez by phone, but he did not answer the call, according to government sources because before he wants to condemn 'outright violence', something 'that he has not done so far', in order to help restore the coexistence as soon as possible.

In addition, the central government considers that "for the dialogue to be effective," Torra "should recognize the other side of Catalans, who are not independentists."

The violent altercations of recent days are carried out by a hard core of about 500 radicals, supported by anti-system extremists from other countries, who use urban guerrilla tactics and who use the Supreme Court ruling as an excuse, experts and police sources explain. consulted by Efe.

The nine imprisoned independence politicians, sentenced Monday to sentences of between 9 and 13 years in prison, supported Torra's statement on Twitter in which dialogue is requested from the central government and violence is rejected.

Minister Marlaska criticized Torra and other members of the Catalan government for their warmth in the face of violence: 'No one understands that they make statements but do not condemn the violence and do not support solidarity with the agents' attacked, among which there are members of the regional police itself Catalan, he recalled.

Eleven of those arrested in the protests since Monday are in provisional prison decreed by a judge.

The self-appointed Defense Committees of the Republic (CDR) have called another protest rally for the afternoon of this Saturday in Barcelona, ​​a call that has been backed by another independence organization, ANC.