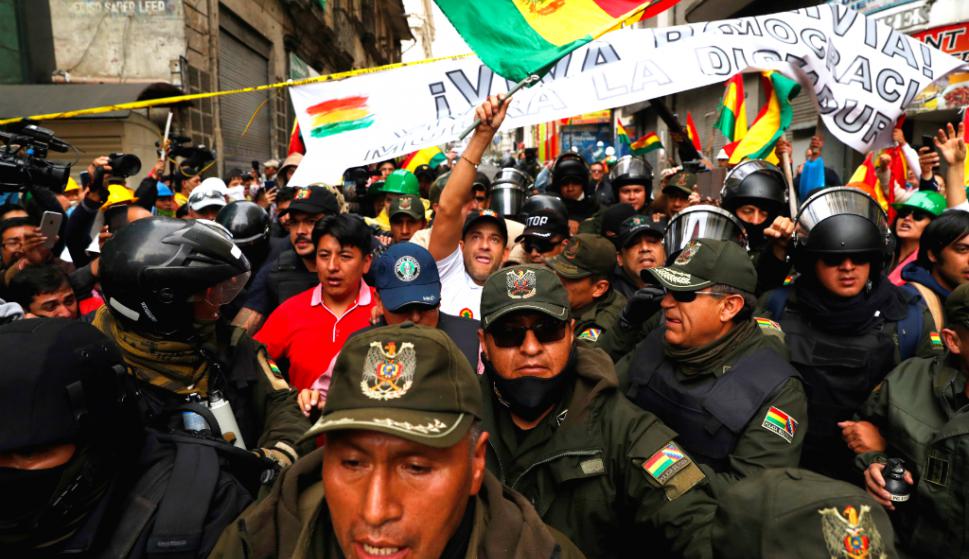 From the beginning of the year 2019 the political temperature of Latin America broke the thermometers. Several governments staggered and thousands of people took to the streets. In the midst of that climate, most of the Uruguayan electoral campaign took place.

Nine days before the national elections of October 27, the social and political crisis in Chile broke out. Now, 12 days before the ballot, Evo Morales resigns from the presidency of Bolivia. The region continues to convulse and the positioning of candidates on international affairs becomes part of the debate.

Until yesterday the two candidates who went on the ballot, Daniel Martínez and Luis Lacalle Pou, had not talked about the crisis in Bolivia. However, figures surrounding them referred to the subject.

The government, the Frente Amplio and the trade union center were in favor of Evo Morales. For them there is no doubt, his departure responds to a "coup d'etat" and a gesture of the former president to avoid bloodshed.

For the Ministry of Foreign Affairs, what happened in Bolivia is a “coup d'etat”. The Foreign Ministry expressed in a statement "his dismay at the breakdown of the rule of law in the Plurinational State of Bolivia" that forced Morales out and "plunged the country into chaos and violence."

The Executive Secretariat of the Frente Amplio issued a statement in which, “before the institutional break”, “expresses its total condemnation of the coup d'etat consummated in Bolivia by violent opposition groups, despite the announcement made by President Evo Morales to call a new electoral process based on the report resulting from the electoral mission of the Organization of American States. ”

In addition, the statement adds that the Front "rejects acts of violence and destruction of public buildings, as well as threats and political persecution of Bolivian government officials and foreign diplomatic representations."

Yesterday at noon the vice candidate for the FA, Graciela Villar, said she supported the government's statement on Bolivia.

A day before Morales's resignation, former president José Mujica recorded a video in support of Morales. “Thank you brother‘ Pepe ’Mujica for expressing your condemnation of the coup plan that uses violence to attack the rule of law. We greet, value and appreciate your support, ”Morales wrote on Twitter.

Thank you brother "Pepe" Mujica for expressing your condemnation of the coup plan that uses violence to attack the rule of law. We greet, value and appreciate your support #NoAlGolpeEnBolivia pic.twitter.com/gQXVymZq2o

Meanwhile, the position of the trade union center was known yesterday afternoon.

"From the Pit-Cnt we demand absolute respect for human rights and call for an immediate restitution of democratic institutions in Bolivia, according to the Constitution and sovereign laws of the Plurinational State of Bolivia," said a statement from the plant.

Ministers take refuge in the embassy of Argentina

Two Bolivian ministers are “in shelter” at the Argentine embassy in La Paz. One of them is Carlos Romero, who was in charge of the Ministry of Government (Interior) since 2015 and who is “in shelter” and not in the form of “asylum,” the sources specified. Subsequently, the case was added, also as a “safeguard”, by Mariana Prado Noya, who served as Minister of Development Planning for the Government of Evo Morales. Uruguay also received inquiries from Morales government officials to obtain shelter or political asylum, Foreign Minister Rodolfo Nin Novoa acknowledged on Sunday.

The position of the whites.

For their part, whites marked a very different position. Former Foreign Minister Sergio Abreu, speaking in a personal capacity, consigned El País that "we are not facing a coup d'etat."

“This has to be fixed with elections, the coup is not because the military did not take power. In any case, they did not obey the president's order to repress the people. The person responsible for all this is the president who made an electoral fraud, ”Abreu said.

For the deputy and elected senator Jorge Gandini the departure of Morales has to be seen in context. “I did not like the electoral fraud of a president who went to his fourth re-election of prepo and with military support. Nor is the military pressure that displaces him. The question is who assumes the power legally so that the town chooses soon and with the due guarantees. Neither Evo nor military government, ”Gandini wrote on Twitter.

For his part, Senator-elect Juan Sartori said that “Bolivia will have free elections thanks to the OAS and international pressure. Hopefully Uruguay's position will be different next year and we will achieve the same result in Venezuela, ”he said.

The position of the colorados.

The elected senator and former Candidate Ernesto Talvi wrote on the Twitter social network yesterday that the “OAS report denounced irregularities in Bolivia's elections. When the sovereignty of the vote is violated, the democratic process loses legitimacy and opens the door to institutional breakdown. We advocate the immediate call for transparent elections and those attached to the Constitution ”.

However, Talvi stated in the Good Day Uruguay program, on Channel 4, that if “the Armed Forces ask for his resignation, let's call him what we call him, I call him a coup d'etat without any inconvenience” what happened in Bolivia.

Talvi clarified that "once the OAS detected irregularities under his presidency and his electoral tribunal, (Morales) must have voluntarily resigned without being asked because he was delegitimized by the facts."

Meanwhile, for former president Sanguinetti “in Bolivia the existence of a tremendous electoral fraud was demonstrated, the Constitution for the enthronement of Evo Morales had been violated. Let's vote for a new election. ”

The position of the Independent Party.

The deputy for the Independent Party Daniel Radío said that “I never justify a lynching. Nor that of Ceausescu, who also had monarchical pretensions. The duty is to stop the angry mobs. Condemn them vigorously. Enough with the story of the spontaneously outraged masses, in Bolivia or in Chile. ”

The leader of that party, Pablo Mieres, said that the resigning Bolivian president "wanted to steal the election by committing a grotesque fraud." “People took to the streets to claim against fraud and it was found that the fraud actually existed. The one who gave a coup d'etat, but it went wrong, was Evo Morales, ”said Mieres.

Víctor Paz Estenssoro was elected president of Bolivia four times (the first in 1952, the last in 1985), being the president with the most tenure in office in the history of his country. His political life led him to be several times in exile, one of them in Uruguay. In 1964 he took refuge in Lima, Peru. Then he went to Argentina and finally arrived in Uruguay. On that occasion he settled in the city of Minas, Lavalleja. There he met a group of friends who met every morning at a pharmacy to drink mate. The people called the group "the wheel of mate." Most of the participants were political leaders of different parties. Paz Estenssoro was very surprised, he said several decades later. In fact, he heard a conversation he left in writing. One of the participants of the wheel commented that the following week he planned to visit an interior town on an electoral tour. Another offered his amplification equipment and, jokingly, suggested that he could lend him some adherents in case the attendance was scarce. Paz Estenssoro commented that in his country that scene was impossible because when two political enemies came together they ended up shooting.

Three questions to Emilio Martínez Cardona, Uruguayan journalist and writer based in Bolivia

You published in 2008 the book "Citizen X: the secret history of evism." How do you now live the resignation of Evo Morales?

The regime of Evo Morales had authoritarian characteristics for several years, not that it now uprooted towards something unconstitutional. Electoral fraud is fully tested and documented by the OAS, both computer manipulation and physical records. From a sample of more than 300 minutes, 78 were filled in by the same hand. Morales's resignation caused unfortunate events such as fires in houses of figures on both sides.

President Morales says he has been the victim of a coup and the Uruguayan government believes him. Was there a coup in Bolivia?

No, what there was was a crisis of legitimacy when, through the audit of the OAS, the commission of electoral crimes was evidenced. What there was was an 18-day civil disobedience process. The role of the Armed Forces and the Police has been very different from that of a coup d'etat. This is something very similar to conscientious objection. Police did not repress fraud protests and the military did not agree to repress police.

This is a crisis of great dimensions for the country's history. What do you think can happen in Bolivia in the coming weeks?

It is presumed that the senator (Jeanine Añez) of the Democratic Unit will have the support of the civic movements. It is vital to know what the attitude of the followers of Evo Morales will be. There are several signs, one of them comes from El Chapare, the coca zone, which are already talking about armed resistance. However, in La Paz, lawmakers from the Morales party have stated that they could participate in the session that will accept the resignation and would add to the change.