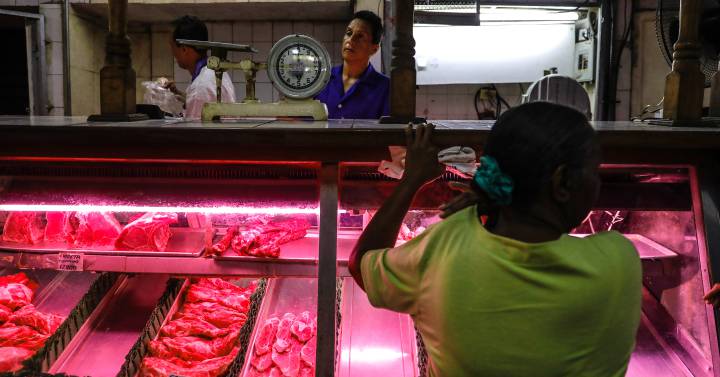 The economic asphyxiation of Venezuela, increasingly deep, determines the steps of Nicolás Maduro and Juan Guaidó. The week of the UN General Assembly evidenced the collision and anomaly in Venezuelan politics. Also the paralysis in which it has been installed. While the opposition pressures to intensify the sanctions of Chavismo, whose effects are strongly felt, Maduro's representatives close ranks with Russia and exhaust all limits to delve into the fissures of the opposition. Reaching an agreement with the minimum concessions to the other party is the battle to which they spend more time.

Negotiation is a practically taboo word in Venezuelan politics. On the opposition side they believe that Maduro will never want to agree with them, while in Chavismo they have resorted to it as a method to save time. It happened in the Dominican Republic and, recently, in Barbados. However, the movements of the two sides, according to conversations with leaders of both sides, have the ultimate goal of reaching a political pact. While the opposition admits some pride in decision-making and the chronic desire to achieve a quick exit, in Chavismo they believe that they are immersed in a marathon and that there are still many kilometers to go.

About 10 months after Juan Guaidó proclaimed himself interim president of Venezuela and was recognized as such by more than 50 countries, the situation of paralysis is increasingly widespread. The opposition's support remains the same, with the United States and Colombia leading the way. Many of the governments that recognized Guaidó, however, have no choice but to also meet with Maduro's representatives, who this week showed Russia's support with a visit to Vladimir Putin in Moscow and whose vice president, Delcy Rodríguez It was he who spoke on behalf of Venezuela from the rostrum of the UN General Assembly.

The fear that he will delve into a cul de sac scenario – both internal and external – is felt within the Guaidó collaborators. "We have to prevent Venezuela from becoming just one more scenario on the world stage," said a senior opposition leader, who has been thoroughly employed this week in New York to intensify pressure on Maduro.

Beyond achieving the nth declarations of condemnations to Chavismo, which to some extent are already empty, the delegation of Guaidó, led by the deputy and former president of the National Assembly, Julio Borges and several deputies – like Borges, exiled by fear to be arrested – very close to Guaidó, as is the case of Miguel Pizarro, appointed envoy before the UN, José Andrés Mejía or David Smolansky, has focused on two fronts: to ensure that the sanctions against the Government of Maduro are increasingly stronger and launch messages, through third parties, to China, Russia and Cuba, whose doors for them are practically closed. In that sense, they trust the good relationship with the UN High Commissioner for Human Rights, Michelle Bachelet, who will soon meet with Russian Foreign Minister Sergey Lavrov and Canadian diplomacy, which maintains a good relationship with Cuba.

Opposition to Chavismo is aware that sanctions are the most effective pressure mechanism. One of the most obvious examples is that, although the application of the Inter-American Treaty of Reciprocal Assistance (TIAR) was seen by the most extremist opposition sector as a way to achieve military intervention, this group suffered a severe setback this week. The TIAR countries pledged, in their first resolution, to prosecute, punish and extradite Maduro Government officials who have links to organized crime and rejected the possibility of opening the military route. The goal, however, is for Europe to strongly join the sanctions against the Chavista regime, something that, for the moment, has not prospered.

Chavism, for its part, bases its international strategy on entrenching itself with the support of Russia and Cuba and resorting to what they have come to qualify as "guerrilla geopolitics." Months ago the objective was to deactivate the threat of military intervention; achieved this point, a strong repression against opposition leaders broke out. Now, the biggest concern is to end the sanctions. The most effective are those that affect the Chavez elite and oil tankers, who have mostly made a dent in Cuba. In addition, the Venezuelan industry is paralyzed and the Executive contemplates how crude oil reserves are at their maximum levels without being able to barely get oil out. In this regard, they hope that the United States will extend the license to Chevron this October so that it can operate in Venezuela despite the sanctions.

All this affects the internal level. Maduro representatives sent several messages to various delegations, especially Europeans, in New York that they would be willing to sit back with the opposition to dialogue under the umbrella of Norway, something Maduro himself insisted yesterday. In private, they admit good harmony with the representatives of Guaidó in Barbados and insist that the main problem in reaching an agreement is the continuous friction between the opposition leaders. From the side of Guaidó it is defended, however, that at the moment when Maduro had to give his approval to start what could lead to a transition process, he rose from the table.

The decision of the Government of Spain to recognize Juan Guaidó as interim president of Venezuela has not prevented the acting Foreign Minister, Josep Borrell, having bridged these months with the Executive of Nicolás Maduro. During the United Nations General Assembly held in New York last week, Borrell also served as the future head of European diplomacy and met on several occasions, in different settings, with Julio Borges, in charge of Guaidó's foreign relations, and with Jorge Arreaza, Foreign Minister of Venezuela, the person with whom he has had the most dialogue within Chavismo. The expectation generated by Borrell's appointment as an EU representative is absolute. If the Government and the opposition agree on something, it is that Borrell has been very interested in achieving a solution to the Venezuelan crisis and that, beyond intensifying the sanctions, the main claim of the opponents of the European Union, there would be welcomed with good eyes the possibility that both parties reached a political agreement after all.