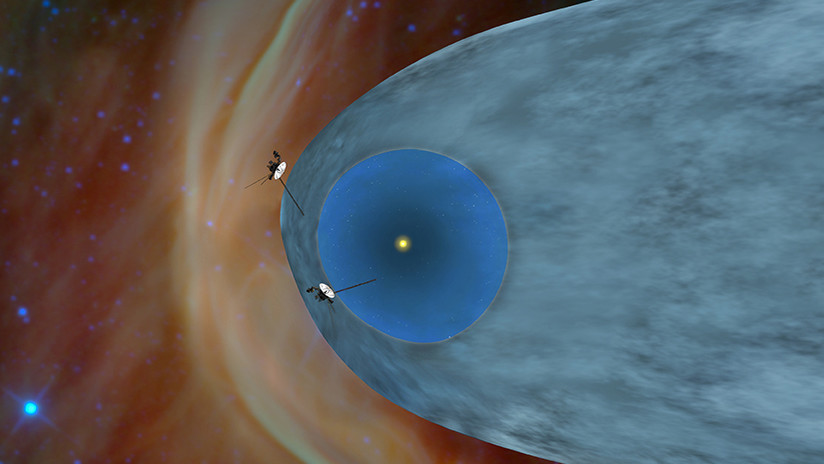 The observations made by NASA's Voyager 1 and 2 probes recorded several strange phenomena linked to the heliosphere, a magnetic bubble within which the solar wind circulates at supersonic speeds, according to the director of that project, Edward Stone, told the TASS agency this November 4.

This specialist explained that these aircraft launched in 1977 transcended the heliopause – the limit of the heliosphere – in 2012 and 2018 and recorded different conditions, since Voyager 2 flew through that outer layer times faster than Voyager 1 and detected a different structure than the First probe

"We assume that this limit is not fixed, but moves back and forth along with the solar activity cycle" and would indicate that "the Solar System 'breathes" https://actualidad.rt.com/ ", something that "It dramatically complicated the image," Stone analyzed, for whom the difference could be explained in part by the fact that both probes went through the heliopause in several regions of the heliosphere.

Stamatios Krimigis, a colleague of Edward Stone, considered "very strange" that on both occasions the heliopause was similarly distant from the Sun – some 18,000 million kilometers – as "a probe crossed it during maximum solar activity and the second during the minimum ".

NASA discovered that the magnetic field of interstellar space is much more stable than was supposed because the probes did not detect changes in their direction, although Voyager 2 revealed that the radiation from open space is three or four times more intense than in the heliosphere and interstellar flights would require more effective means of protection.

Despite these advances, Voyager 1 and 2 are far from leaving the Solar System. To achieve that goal they would have to overcome the Oort Cloud, a collection of space objects under the gravitational influence of the Sun. NASA estimates that it would take about 300 years to enter there and around 30,000 to travel beyond.

These probes have greatly exceeded expectations to become NASA's most lasting mission: they were built to last five years and have been active 41, with satisfactory results. His initial task was to develop studies on Jupiter and Saturn and extended the goal to Uranus and Neptune.

If Voyager 1 and 2 can continue traveling for millions of years, both probes have gold records that store sounds, images and messages from our planet that could function as time capsules and become the only vestiges of human civilization.