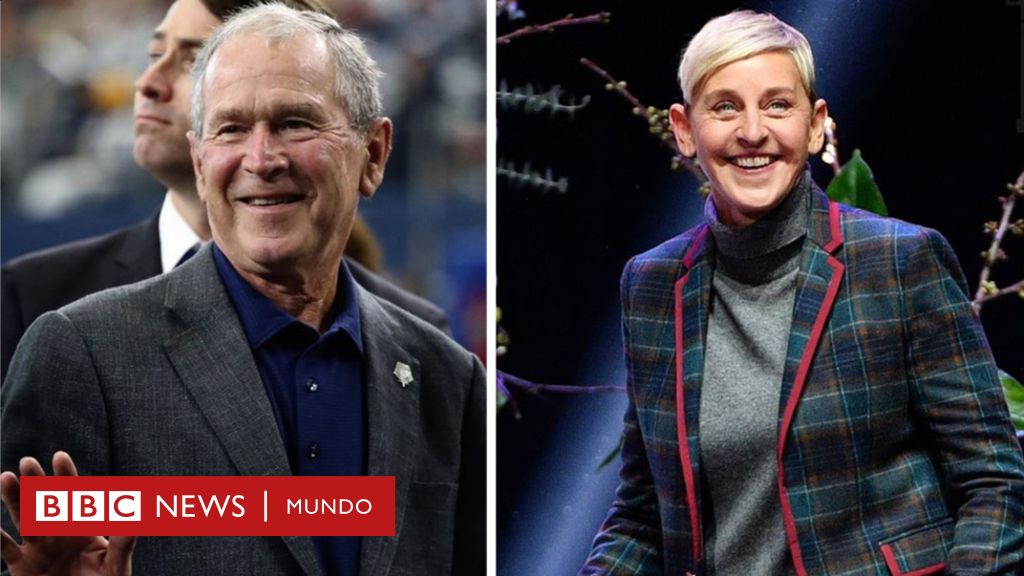 Friends, although with very different opinions.

The famous American comedian and television host Ellen DeGeneres won criticism for being close to someone who thinks very differently from her.

This is the Republican George W. Bush, with whom he shared a football game, generating all kinds of reactions in the country.

The former Republican president opposed homosexual marriage while he was in power and that was one of the circumstances that led some in the country to criticize DeGeneres being close to him, given the profile of the host, openly liberal and homosexual.

But for DeGeneres, their differences do not imply that they cannot be friends.

"I am friends with George Bush," DeGeneres said during a recording of his television show.

"I am friends with many people who do not share the same beliefs as me."

"Yes, that's me in the Cowboys game with George W. Bush over the weekend. Here's the full story," wrote DeGeneres.

DeGeneres said she and his wife, Portia de Rossi, had been invited to watch the Dallas Cowboys play against the Green Bay Packers at the Dallas stadium on Sunday for Charlotte Jones, daughter of Jerry Jones, owner of the Cowboys.

He added that Jones had "elegant" friends and showed the audience a video he filmed during the game, in which the camera moves quickly to stop over Bush, sitting in the next seat.

He seemed puzzled by the proximity of the camera, until he smiled.

"Laura and George Bush sitting with Ellen Degeneres and Portia de Rossi is not something I expected to see in a National Football League game," a user identified as "Paid man gets bored," tweeted.

"During the game they showed a picture of George and I laughing together and, therefore, people were upset. They thought: 'Why is a Hollywood gay liberal sitting next to a conservative Republican president?' … A lot people were angry and they did what a lot of people do when they are angry: tweets, "DeGeneres said on his show.

"No, I'm sorry. I have nothing in common with George W. Bush, who launched a war based on lies that caused an incalculable carnage," Peter Daou questioned, sharing another comment on Twitter asking for more acts like DeGeneres with Bush. .

The host didn't show any of the negative tweets, but she did show an edited version of one of @Matthew_Oooo (see below) that said: "Ellen and George Bush together make me have faith in the United States again."

The original had a "HAHAHA" at the beginning of the tweet that had been removed.

The BBC sent a message to Matthew, who said he was a student from Canada.

"I think it's strange that a senseless tweet from a Canadian has become such a commented point in the US news," he said.

As of Tuesday night, DeGeneres' comment about his friendship with Bush already had more than 11 million views on Twitter.

The comedian ends her monologue explaining that just because she didn't agree with someone at all, it didn't mean she couldn't be friends with them.

DeGeneres urged people to be kind to each other and thanked the president for a fun afternoon (pointing, in a humorous tone, that he owed $ 6 for the nachos she had bought him).

What happened to the man who threw his shoes against George W. Bush 10 years ago in Iraq

Since leaving the White House, Bush has earned the reputation of being "softer" than when he was in office.

His friendship with former first lady Michelle Obama, for example, has been extensively documented, and the two have been seen sharing candy at public events.