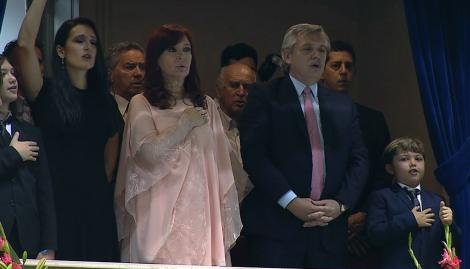 During the assumption of Axel Kicillof as Buenos Aires governor there were several colored scenes. Like the gesture of the eldest son of the former Minister of Economy in the box that surprised Vice President Cristina Kirchner, the moment in which a pillow was placed in the chair where the governor sat and the moment when outgoing president María Eugenia Vidal He helped put on the band.

The governor arrived accompanied by his family to the Legislature: his wife Soledad Quereilhac and their young children León and Andrés, who were all the rage in the networks for their look. Both were in black suits, ties and slippers. Leon, unlike his younger brother, wears long hair.

But not only did they attract attention for their particular dress. Since Leon made a gesture that surprised Cristina, while singing the national anthem in the middle of the oath. At that moment he made the traditional gesture with the fingers of the "V" Peronist, and the vice looked at him sideways and smiled at the baby's reaction.

The moment that made Kicillof laugh, when a cushion was approached

At another moment of relaxation, before his extensive speech after the oath, he starred in a scene that generated laughter. Before a collaborator sat down, he placed a cushion on the chair to make it more elevated and comfortable.

After the oath Vidal helped Kicillof to put the band with the Argentine flag, after the oath as governor of Buenos Aires.

The detail on the right shoulder of the governor

Kicillof, on his right shoulder, was wearing a button for the provisional president of the Buenos Aires Senate, María Teresa García, to place the Buenos Aires band there. That button made the band not move from one side to the other, as it complained several times about the swing.

"I'm not used to it," he relaxed as he took an oath to his ministers. Maybe that's why he decided to put a button on one side of his suit and an Argentine flag on the other side.

News in development that is being updated.