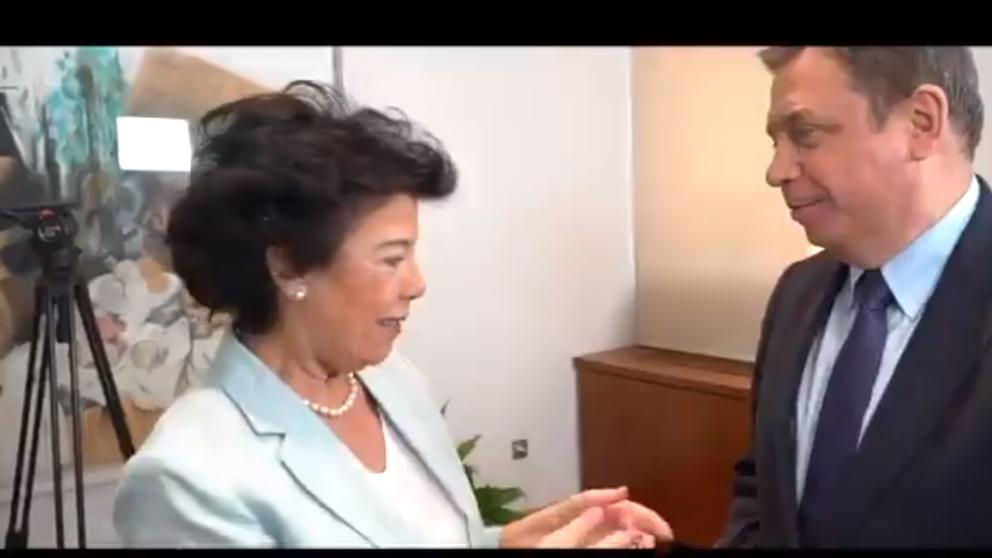 At 7:30 in the morning of this crucial Monday in which the judicial judgment of the cause of 'procés' will be known, the Government has made public a promotional video in which it evokes Spanish democracy, “the house of all” , proclaim in English, in French, German, Russian and in Spanish.

The video has been disseminated by Moncloa a few hours after hearing a judicial ruling that will mark the future of the political situation in Spain and Catalonia, and that will surely serve to question the democratic quality of the Spanish system in the international light. Precisely, the published document has that target audience, the countries of our environment, among which we want to "explain the strengths of our democratic system," as noted in the Government.

The Vice-President, Carmen Calvo, who only speaks in Spanish, along with Josep Borrell, who does so in English and French; Interior Minister Fernando G. Marlaska, Minister of Education and spokesperson Isabel Celaá; the head of Economy, Nadia Calviño; the head of Agriculture and Territorial Administrations, Luís Planas; the one of Ecological Transition, Teresa Ribera; that of Culture, José Guirao, and that of Science, Pedro Duque.

Without a specific address, some phrases or fragments of interviews with the ministers are heard in the video, among which Calviño's stand out: "Nationalisms divide society", Marlaska's: "It was very hard for us to achieve an authentic real democracy, so let's not forget it ”, or Borrell's, who referred to the Spanish as“ one of the most consolidated democracies in the world ”. Ribera points out in French that "differences always make us more special", while Calvo indicates that "I could not imagine living in a country that was no longer the democracy we are."

In the long version of the video, the "solidarity of Spanish society" stands out, but a comment by Celaá stands out, reminding her that her mother used to ask her not to speak at school about the things they used to talk at home, "and He was right, ”he says,“ because there was no freedom at that time and we lived in the dictatorship of Franco, which lasted 40 years and was really terrible. ”

Calvo points out that Spanish democracy has been linked to the advancement of women's rights, while Borrell recalls that in Spain, homosexuality has gone from being considered a disease to becoming one of the most open and tolerant countries. The day the gay marriage law was passed was "very important" for Minister Marlaska, he confesses.

“I don't like nationalisms. I think they are movements that look to the past that no longer exists and that seek to control the future ”

Planas launches a message for young people, who recommends that if they want to "achieve something," such as "the country" or "the EU," it is better to "do it all together." In the same sense, Calviño approaches, who openly attacks the nationalisms. "They feed on differences and not those that unite us."

These ideas include Minister Guirao, who confesses that he does not like nationalisms because in many countries where war prevailed. "I think they are movements that look to the past that no longer exists and that seek to control the future."

The reference to the Catalan question is closer if Ribera remembers that her mother was born in Barcelona and that her father was a Catalan family, so she has family there (cousins, uncles …) so whenever she went she felt like part of a very modern society ”. But it is Celaá who warns that "when nationalism is radicalized, all kinds of sufferings occur between couples, brothers, in communities, within families."

“When nationalism is radicalized, all kinds of sufferings occur between couples, brothers, in communities, within families”

Planas also remembers that his father was Catalan and went into exile with Franco, and when the Nazis arrived in France he returned to Spain, but suffered the situation of nationalism in Europe during the last century, which "was a great disaster."

The possible possible reproaches about the low democratic quality of Spain in the face of the advent of the sentence contradict the situation of the dictatorship prior to the transition. In this sense, Calvo says he remembers a lot of the lack of rights and freedoms suffered by his mother, his grandmother, his great grandmother … as opposed to the "immense honor" that supposes for her to be in the Government

Minister Duque uses Russian to highlight the technological advances in Spain that have been recognized internationally for 40 years.

What will be after the ‘procés’ sentence?