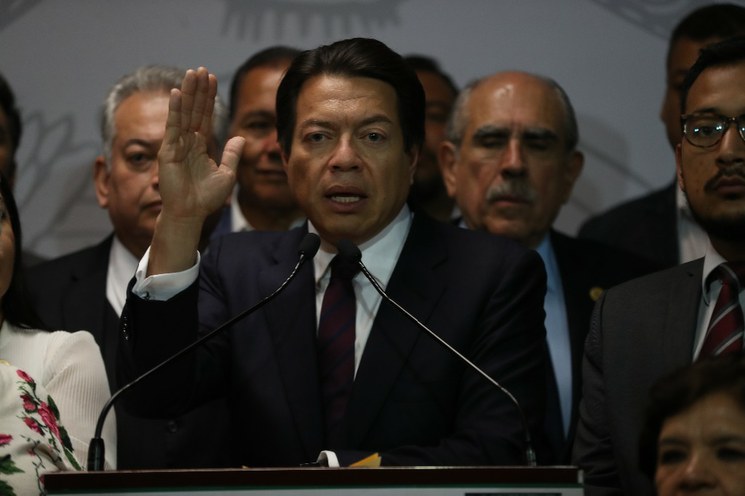 Thursday, October 10, 2019. About to begin the district assemblies that mark the beginning of the process of renewal of the national leadership of Morena, the coordinator of the bench of this party in San Lázaro, Mario Delgado, gathered more than 200 federal deputies, senators, local legislators and mayors to request to the instances of direction of that political institute a transparent election, without simulation, corruption or politiquerías.

Delgado, who aspires to the presidency of the National Executive Committee (CEN) of Morena, said that postponing the process, as proposed by the acting president, Yeidckol Polevnsky, corresponds to the organs of the party.

He insisted that three surveys be conducted to define the next CEN president and thus follow the recommendation made by President Andrés Manuel López Obrador. Not listening to the president would be a historical betrayal for the movement, he warned.

When issuing a message in the lounge of a hotel in Mexico City, the legislator came back in shouts of support. 111 of the federal deputies who heads in San Lázaro, five senators, 48 ​​local deputies and 50 mayors of different entities attended.

Delgado was located in the main room of the room next to the deputy Tatiana Clouthier and the Mexican leader Higinio Martínez.

They had reserved seats with Delgado for the coordinator of Morena in the Senate, Ricardo Monreal, and Deputy Dolores Padierna, but they did not attend.

During his message, the federal deputy asked for a transparent and democratic process; that we have a standard without simulation; that no one be excluded; that there be debates among those who want to lead the movement. Public debates, presenting their ideas, their projects; that the recommendation and the direction set by the President and the leadership be chosen through surveys.

He called all the morenistas to conduct themselves with a lot of responsibility and political maturity, as well as to take care of the party.

In the morning, Delgado abounded in the position of the current national leadership of Morena about postponing the election. He said the postponement creates distrust and uncertainty among the militancy and questioned the reliability of the list of militants used in the process.