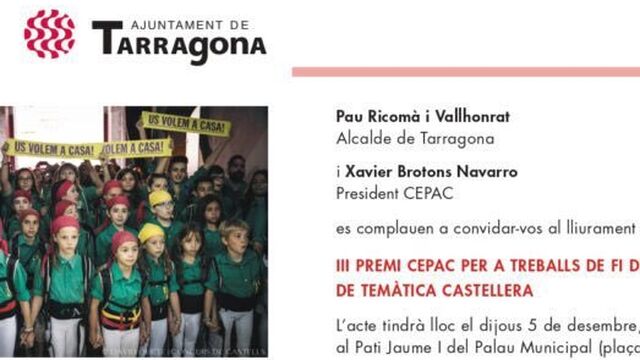 Catalan Civil Society (SCC) denounces that the Tarragona City Council "uses photographs of children holding secessionist symbology to place it on official cards as a formal invitation to an awards ceremony". The mayor is Pau Ricomà, from ERC.

SCC recalls that this government team is the same one that placed banners on the facade of the town hall where 'Llibertad political prisoners' is read; the one who removed a large portrait of King Philip VI from the plenary hall or the one that allowed the placement of yellow plastic ties in public spaces of the city.

These facts, according to the head of SCC in Tarragona, Salvador Caamaño, "apart from being questionable by the use of public flows to advertise a certain political ideology, which is also a minority in the city of Tarragona and in Catalonia, highlights how from nationalism and its totalitarian conception there is not the slightest problem in any, when not to trample, the rights and freedoms of the majority, in manipulating and indoctrinating, in fostering division and confrontation among citizens, in using institutions public as if they were their particular 'cortijo'.

In a statement, Caamaño explains that "indoctrination has been present throughout the recent history of mankind in all fascist and communist dictatorships, and is the current fundamental piece of jihadism." "These regimes," he continues, "have attempted to capture the children's and youth sector in a special way since children and young people do not have a defined personality and it is therefore much easier to mold their minds to absorb ideas, values ​​and principles. that totalitarian systems want to instill them. "