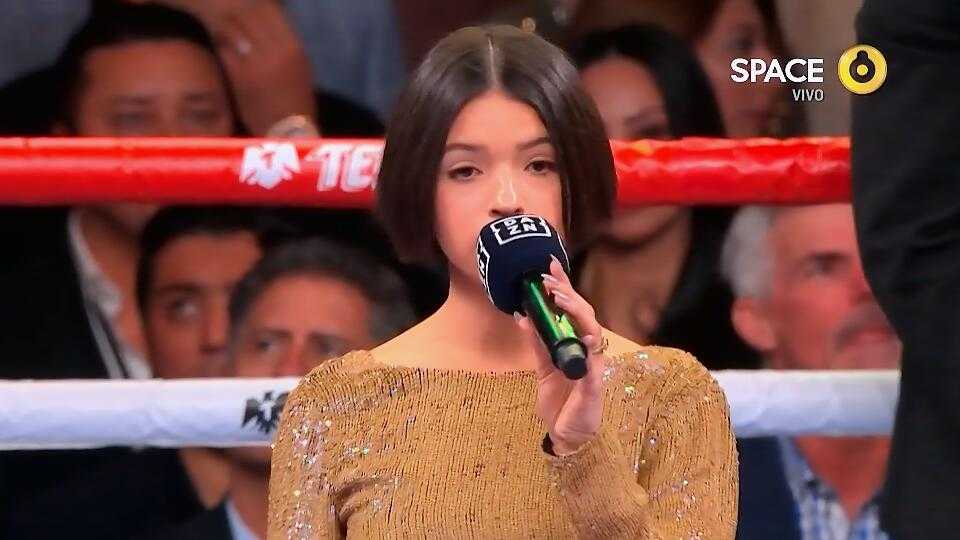 It may be that many doubt the talent of Canelo in boxing, but not the voice of Ángela Aguilar. And that was demonstrated on Saturday night (almost early Sunday) in Las Vegas, when Pepe Aguilar's daughter was in charge of singing the National Anthem of Mexico in the Canelo fight.

Before Saúl Canelo Álvarez and Sergey Kovalev exchanged blows at the MGM Grand Arena, singer Angela Aguilar was responsible for singing her highest notes to interpret the Mexican National Anthem, which left 'with goosebumps' to many of her countrymen .

With a noticeable change of look, when wearing a much shorter haircut, Ángela Aguilar went out to the quadrilateral to demonstrate that she is a worthy representative of the Aguilar dynasty, initiated by her grandparents Don Antonio Aguilar and Flor Silvestre.

Without making a mistake once in the letters of the Mexican National Anthem, Angela wore a sober and elegant ocher-colored dress with sunflower sparkles, which made her look much older at the age of 16 ”.

"Long live Mexico," Angela Aguilar shouted at the end of her masterful performance, and then gave way to actor and singer Jean Carlo Canela, who was in charge of the National Anthem of the United States.

Pepe Aguilar's daughter had her first chance to sing before a major boxing match like Saturday night.

But it is not the first time that the Aguilar dynasty takes over the Mexican National Anthem in an evening stellarized by Canelo.

Leonardo, grandson of Antonio Aguilar, did it in 2016 on the billboard of Saúl Álvarez and Liam Smith.

Two years before Pepe Aguilar went up to the ring to sing in the fight between Canelo and Alfredo Perro Ángulo.

Canelo will try to get his fourth title in different categories.

Before his daughter went up to sing the anthem, Pepe Aguilar gave an interview in which he was proud of his offspring.

“It's a great opportunity that Canelo is giving to teach all his fans, in an event where he had never been, it is the first time a boxer invites three family members to sing, Canelo invited my son in Dallas , I have sung and now my little daughter is a great honor and a great responsibility, ”said Pepe Aguilar.