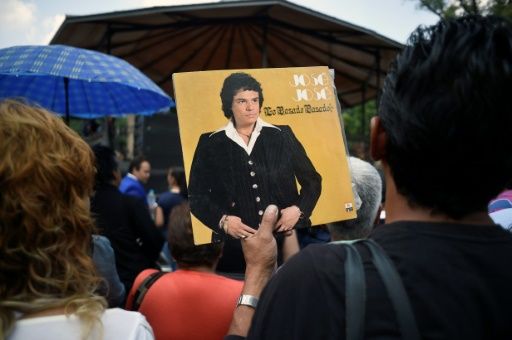 After more than a week of family lawsuits and a large media coverage plagued with misinformation, the ashes of Mexican singer José José arrived on Wednesday in Mexico City, where crowds are expected to finally say goodbye to his beloved "Prince of the song".

The Mexican military plane, facilitated by the government to move the remains from Miami, United States, landed shortly before 9:00 am (2:00 pm GMT) in the presidential hangar of Mexico City.

Shortly after, the singer's eldest sons, José Joel and Marysol, who traveled with the ashes, offered a brief statement to journalists. They were also accompanied by their mother, Anel Noreña.

"We have brought back the heart of our beloved prince of the song, of my dad, he is already in his homeland, thank you all for his time, for his patience," said José Joel.

"My father, our prince José José is already in Mexico, thank you very much," said Marysol.

A classic model hearse entered the hangar to receive the remains and departed from the airport, located east of Mexico City, escorted by police on motorcycles, heading to the central Palace of Fine Arts, where he will receive a national tribute.

The mortal remains of José Rómulo Sosa Ortiz, his real name, were cremated on Tuesday in Florida and divided between José Joel and Marysol, the result of his second marriage, and his youngest daughter, Sarita, who had with his third wife, the Cuban Sara Salazar

The tribute organized by the government in Bellas Artes, the maximum cultural site in the country, will take place between 10 am and 1 pm (3 pm to 6 pm GMT).

Around the palace, long lines of fans of all ages, carrying photos of the artist and singing some of his most famous songs, awaited the arrival of the hearse.

The National Symphony Orchestra, accompanied by opera singers, will perform pieces made famous by José José, such as "The ship of oblivion", "The Sad", "Pillow", "O tu o yo", among others.

Mass will also be held in the Basilica of Guadalupe.

The procession with the funeral remains could pass through Clavería, a middle-class neighborhood of the capital where José José was born and lived and where there is a statue in his honor, turned into a scene of the spontaneous tributes that thousands of Mexicans have paid to his "The prince".

His remains will be deposited in a capital pantheon with those of his mother, who was a pianist.

According to Mexican media and in the United States, the last will of the "Prince" would have been to be cremated and, reluctantly, José Joel and Marysol agreed with Sarita and the singer's widow to leave half of the ashes in Miami, where he died on 28 September at age 71.

In the bitter dispute between the offspring of José José has come to mediate until the Mexican president, Andrés Manuel López Obrador.

"We cannot get to give an opinion on matters that correspond to the family. Nothing else exhorts them that if there are differences (…) that make a truce, that the tribute be made (in Mexico) and then later if they decide to continue with their differences, they are in full right, "said the president.

Still on Monday, José Joel published in his social networks that they had been able to stop the cremation for 48 hours and declared that he did not agree to divide the ashes.

Son of an opera singer, José José is considered the most privileged voice among Mexican performers.

He adopted his stage name after the death of his father, in 1968, also called José. He was nicknamed "The Prince" for an album so titled.

José José built a career of more than 50 years and sold more than 100 million copies.

However, since they are not the author of their melodies, the royalties are lower.

His life was marked by alcoholism and he lost his privileged voice to the degree of barely speaking. He also suffered from pancreatic cancer, which severely undermined his physical condition.

The world of Hispanic music met him after in 1970 he masterfully performed live "El Triste" in a Latin American contest.

He popularized songs by famous composers such as "If you leave me now," by the Spanish Camilo Sesto, or "Ya lo past Past", by Juan Gabriel.