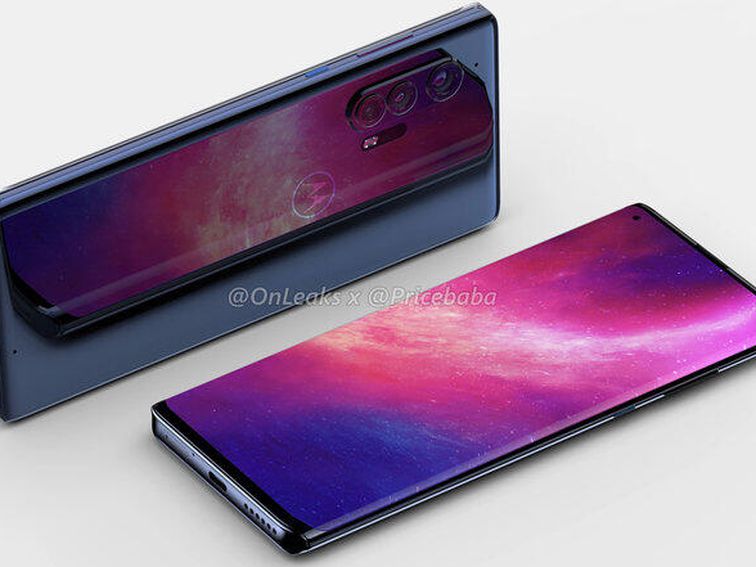 This would be the Motorola Edge Plus.
Onleaks
The Motorola Edge Plus will be the sexiest phone of the firm in recent years, at least we can think of that thanks to the most recent filtration from @OnLeaks. The renowned leaker published on the Pricebaba page a series of computer images (renders) of the alleged Edge Plus, a phone that Motorola will launch as high-end this year. The cell phone, as seen in the images, will have a huge screen and just a few bezels.

The images show a phone that looks more like a Samsung phone because of its curved sides that eliminate almost any side bezel. In the only area that we find some bezels is at the top and bottom of the screen. The camera will be on the screen but, at least from what you can see, it will be very, very small. Turning to the back of the alleged Motorola Edge, the company would place a rear camera with three lenses, the respective flash and a fingerprint reader integrated into the screen. The back would also have the company logo surrounded by a ring that would light up when receiving notifications, because that is the function of a similar ring on other Motorola phones. Motorola has somewhat forgotten its presence in the high range. The company has not launched a phone for that category for several years now, but that drought is about to end soon. The Motorola Edge Plus is a phone that clearly seems to fit in this high-end, although it still needs to know its battery, (which should be no less than 4,000mAh), the processor (which should be a Snapdragon 865) and its RAM, which should be 8GB or more. These specifications would be almost mandatory if Motorola wants to seriously compete with the first high-end 2020s such as the LG V60, Galaxy S20 or Oppo’s Find X2. Motorola has not said anything official about the alleged Edge Plus, but is expected to arrive first in the United States with Verizon and then reach other regions. The company recently launched a new mid-range phone, the Moto G8, which is made to compete in Latin America, Europe and Asia.