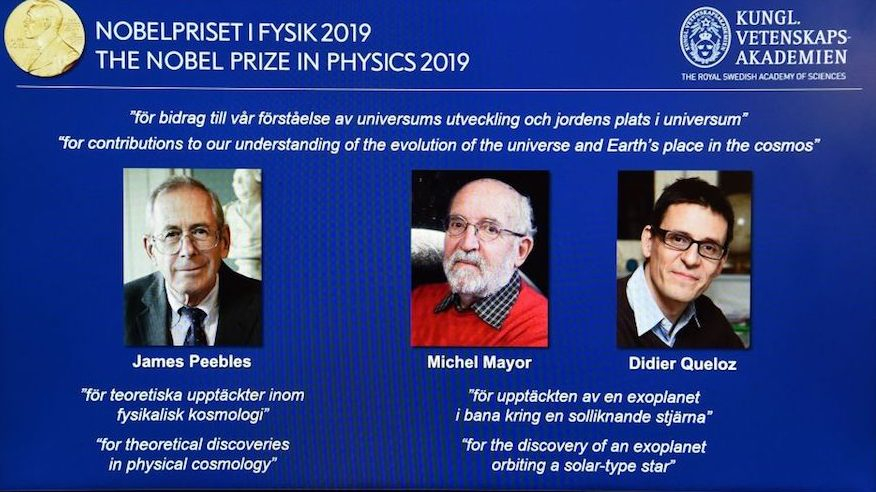 (WAB NEWS) – The Nobel Committee announced on Tuesday that the 2019 Nobel Prize in Physics is shared between three researchers.

One half of the prize goes to James Peebles "for his theoretical discoveries in physical cosmology" and the other half, together to Michael Mayor and Didier Queloz "for the discovery of an exoplanet orbiting a solar-type star."

BREAKING NEWS:
The 2019 #NobelPrize in Physics has been awarded with one half to James Peebles "for theoretical discoveries in physical cosmology" and the other half jointly to Michel Mayor and Didier Queloz "for the discovery of an exoplanet orbiting a solar-type star." pic.twitter.com/BwwMTwtRFv

James Peebles was born in 1935 in Winnipeg, Canada. He is a professor of science Albert Einstein at Princeton University, United States. His theoretical discoveries contributed to our understanding of how the universe evolved after the Big Bang.

Michel Mayor was born in 1942 in Lausanne, Switzerland. He is a Swiss astrophysicist and emeritus professor of astronomy at the University of Geneva, Switzerland.

In October 1995, Michel Mayor and Didier Queloz announced the first discovery of a planet outside our solar system. This discovery initiated a revolution in astronomy and since then more than 4,000 exoplanets have been found in the Milky Way.

"Their discoveries have forever changed our conceptions of the world," says the Royal Swedish Academy of Sciences, which awards the Nobel Prizes, in a press release.