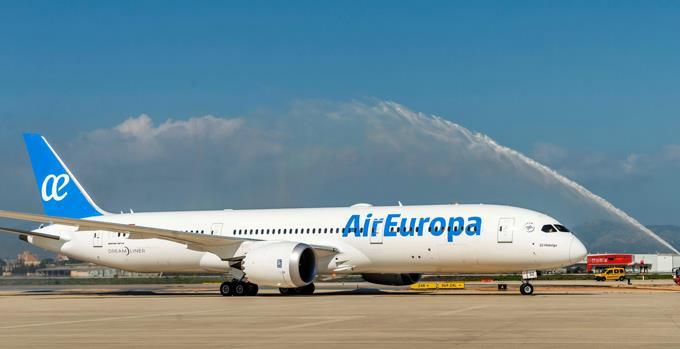 The IAG group announced today that it reached an agreement with Globalia for the purchase of 100% of the capital of Air Europa, through IBERIA, an operation valued at around 1,000 million euros, which will be paid in cash at the end of the process shopping.

This agreement allows Air Europa to join a solid group of airlines that have grown and improved their performance within IAG, and have benefited from all the opportunities that the group offers them, from which Air Europa will also benefit, which It will maintain its brand, according to a press release from the IAG Group.

This operation will help make Madrid a more efficient hub, which will be able to compete better and with better tools with the main hubs in Europe. In addition to contributing to the network of routes between Europe and Latin America, it will allow for more connectivity and critical mass to open new routes and grow in other markets where it is not present or its presence is very small and offer better services to customers.

The purchase operation is expected to be completed in the second half of 2020, after receiving all necessary approvals.

Meanwhile, Air Europa and IAG airlines will continue to compete as before.

Willie Walsh, CEO of IAG, commented: “the acquisition of Air Europa means adding a new competitive and profitable airline to IAG, making Madrid a leading European hub and allowing IAG to achieve the leadership of the South Atlantic, thus generating value Additional financial for our shareholders.

The statement states that IAG has a solid track record of successful acquisitions, the most recent with the acquisition of Aer Lingus in 2015, and we are convinced that Air Europa represents a great strategic fit for the group. ”

Javier Hidalgo, CEO of Globalia, said: “For Globalia, the incorporation of Air Europa into the IAG Group means a strengthening of the present and future of the company, which will maintain the line followed by Air Europa during the last years. We are convinced that it will be a success for Air Europa to join a Group like IAG, which has demonstrated during all these years its commitment to the development of the airlines that make them up and to the Madrid hub ”.

Luis Gallego, CEO of Iberia, considers that “This operation is of great strategic importance for the Madrid hub that, in recent years, had lagged behind other European hubs. After this agreement, Madrid will be able to compete with other European hubs on equal terms, with a better position on the routes from Europe to Latin America and the possibility of becoming a gateway between Asia and Latin America. ”

A very positive operation for air connectivity in Spain, the Madrid hub, tourism, the Spanish economy, and for customers

• Madrid is a hub with a lot of potential but has been losing positions with respect to the big European hubs, both in size, as well as in the number of flights, destinations and passengers.

Of the 20 largest airports in Europe, Madrid ranks number 19 in terms of the number of destinations offered.

Of the 10 main airports, Madrid is the 9th in terms of countries served.

To compete with the rest of European hubs, Madrid needs to be more efficient, because in aviation, more than individual airlines, hubs and large groups compete

• Madrid is geographically well placed for traffic between Europe and Latin America, but its weight in other large markets, such as Asia or Africa is minimal.

• In Madrid, IBERIA has a lower weight than other similar airlines in its hubs. In fact, IAG's joint share with Air Europa is 39 percent, lower than that of competi tors in Paris Charles de Gaulle, Frankfurt or Amsterdam.

• Iberia has demonstrated its commitment to the growth of the Madrid hub. As an example, in the data accumulated to September, the Madrid airport has grown to 6.9%, two points above the average of the rest of the AENA network that has grown to 4.8%. In this same period, Iberia has grown 7.3%.

In the first 8 months of the year, Air Europa has grown 12.4% its passengers.

Since the acquisition of Air Europa in 1991 by a group of investors headed by Juan José Hidalgo, the airline has expanded both in the domestic market and in the international and transatlantic market. Air Europa currently operates 69 destinations with a fleet of 66 aircraft and annually transports 11.8 million customers.

Air Europa has demonstrated in recent years to be an airline capable of competing in the Madrid hub, with significant growth and continued development, opening of routes and new destinations (mainly in Latin America and the Caribbean) and has contributed in a solid way and sustainable over time to the development of connectivity in Madrid and Spain.

Air Europa has made a great commitment to renew its long-haul fleet reflected in the purchase of 29 Boeing 787-8 and B787-9.

The incorporation of Air Europa to IAG, through IBERIA, will allow to generate more traffic and therefore more destinations and more airplanes:

The operation will improve the position of the Madrid hub to attract additional connection traffic and compete successfully with other global hubs. In addition, the combined short radio network of IBERIA and Air Europa will provide customers with flexible schedules and the ability to operate effectively in the highly competitive short radio market.

• The combination of Iberia and Air Europa will create the fifth largest airline in Europe in number of long-haul aircraft with 63 aircraft, just behind KLM with 65.

• This operation is also very important to the extent that it is aligned with the investment of € 1,571 million announced by the Government of Spain through AENA for the development and growth of the Adolfo Suárez Madrid-Barajas airport,

which could become the gateway between Asia and Latin America and between Europe and Africa.

The contribution to the Spanish economy

In Spain, according to a recent IATA report, aviation is vital to the country's economy. It is behind 1.7 million jobs and contributes 9.2 percent of gross domestic product (World Bank latest figures, 2016)

• According to the IATA model, for every 1,000 additional passengers obtained, about 9 jobs are created and 850,000 euros are added to the Spanish economy.

• According to the WTTC (World Travel & Tourism Council), 1 in 10 jobs in the world are from the tourism sector; Currently, one in five new jobs created are tourism; and between 2020-2029 they will be 1 in 4. This operation will make Spain much more competitive in long-distance tourism thanks to the connectivity that can be developed with emerging tourism countries that mostly have few connections with Madrid, also compared with other European hubs.

• The incorporation of Air Europa into the group would allow, under current market conditions, to add up to 12 million more passengers and add up to 10 new long-haul destinations and a contribution to GDP of more than 280 million euros.

• Possibility of opening more routes or making existing ones more sustainable. After the incorporation of Vueling to IAG, for example, the airline has added 70 aircraft (from 55 in 2012 to 125 currently) and has reinforced Barcelona airport with 11 million seats and 50 more destinations.

• The feeding of flights of the airlines of the group improves the occupation and therefore allows to make profitable routes that without that feeding would not be. It would be a great opportunity, for example, to grow in Asia, Africa and North America

• The creation of Iberia Express, for example, has allowed to open about 20 new destinations from Madrid to which Iberia did not fly, while improving the feeding of Iberia flights over the long radius, which has also resulted in being able to open or reopen flights to new destinations.

• The synergies achieved by belonging to a large group allow to compete with lower prices and better services.