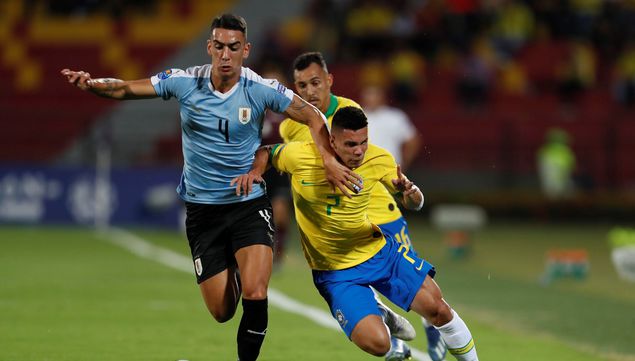 The pifias of goalkeepers Iván and Ignacio de Arruabarrena marked on Thursday the 1-1 draw between Brazil and Uruguay on the second day of the final home run of the South American Pre-Olympic, a result that left both teams very badly stops facing the last date.

With equality, Brazil was in second place with two points, one more than Colombia and Uruguay, although the coffee team has to play later with Argentina, which leads the group with three points and is ready to get one of the two quotas from the region to Tokyo 2020.

In the Alfonso López stadium, in Bucaramanga, Gustavo Ferreyra’s team showed a good image in the first minutes, especially with the mobility of Juan Ignacio Ramírez and Federico Viñas who began to strip the defects of a defense that could not be consolidated in any moment of the tournament.

However, Brazil demonstrated its offensive value and had the first approach at minute eight with a right-wing Matheus Henrique that forced the showdown of De Arruabarrena.

With the passing of the minutes, Uruguay’s high pressure began to have a positive effect and, taking advantage of the spaces, had a very clear opportunity in which Juan Ignacio Ramírez missed the goal one hand at a time.

In that context, with little creativity of those led by André Jardine and a lot of fighting in attack by La Celeste, the 0-1 came when midfielder Manuel Ugarte took a right, the ball hit Bruno Fuchs and goalkeeper Iván made a pipher which ended with the ball at the bottom of the net.

With the result in its favor, Uruguay seemed to be motivated but the Auriverde equaled five minutes later when Pedrinho headed in the area and De Arruabarrena, in an inexplicable play, caught the ball, then slipped it between his legs until he crossed the line of fund and reacted when Brazilians already celebrated the tie.

In the beginning of the second half the Canarinha had the same problem as in the initial stage: the extremes Paulinho and Antony, two of the most outstanding players of the tournament, appeared little and that the rest of the team noticed.

Meanwhile, Uruguay maintained the momentum and continued attacking. The clearest was at minute 54 when Joaquin Piquerez took a free kick that hit the right vertical and left the field.

Brazil regained control a little and its figures appeared more, as was the case of Bruno Guimaraes, recently signed by Lyon, and Antony, who led the attacks.

This was how the Canarinha had the clearest with a center of Antony for Cunha, who anticipated the centrals and managed to take a double shot that twice stopped De Arruabarrena, trying to make up for his mistake.

In the end the match opened and arrivals abounded in both arcs but neither managed to define the match, which is why they will have to look for the classification on the last date.

Brazil will face Argentina, while Uruguay will play against host Colombia. EFE