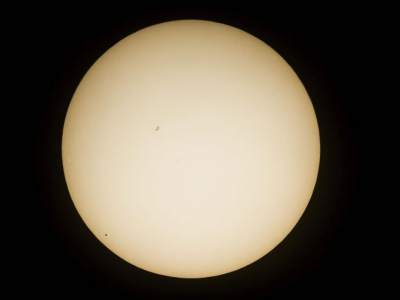 On May 9, 2016, the planet Mercury walked in front of the Sun, a "walk" that lasted almost four hours and that, three years later, will be repeated. It will be an almost unique opportunity that will not appear again until 2032.

This phenomenon, called "transit," only happens with the two planets that stand between the Sun and Earth (Mercury and Venus) and occurs very rarely: thirteen times every hundred years in the case of Mercury and another thirteen every thousand. years in Venus.

These types of events are not only important for science, they are also a beautiful spectacle that demonstrate Kepler's laws and that we are part of a world in constant motion around its star, which dominates the center of the solar system.

The first to observe Mercury passing in front of the solar disk was the French astronomer Pierre Gassende, on November 7, 1631, 388 years ago, although Johannes Kepler had predicted that the phenomenon could happen – also with Venus – when describing for the first time the heliocentric orbits of the planets with the laws that are named after them today.

Seeing a show like this "is worth it because it makes us think about what our solar system is like and how astronomy is revealing it," underlines Efe the astrophysicist, disseminator and director of the Pamplona Planetarium, Javier Armentia.

Mercury is the smallest planet in the solar system and the one closest to the Sun. Therefore, it has the fastest and most eccentric orbit of all the planets, in addition to an abrupt and fascinating geology, full of craters, ridges, mountain ranges and mountains .

Read: The historic journey of the kings culminating reunion of Spain and Cuba

But "Mercury is so small, compared to the solar disk, that to see it you have to amplify the image with optical systems that increase the shadow in front of the disk and either project it or allow its direct observation, something that is not possible to do in home, "warns the astrophysicist.

The most advisable thing is to go to one of the numerous observations that will be organized by planetariums or astronomical groups, to "observe the phenomenon effectively and above all in a safe way," Armentia emphasizes.

And it is that looking at the Sun without using specific protection is very dangerous because in a very short time it can cause significant corneal injuries and retinal burns, warns the Planetarium of Madrid.

A walk of almost five hours

On this occasion, the transit of Mercury, which from Earth will be observable on Monday, November 11, will begin at 13:35 local time (12:35 Universal Time) with the "immersion", which is the first contact between Mercury and the solar disk

For almost five hours, Mercury will look like a tiny black disk that will "walk" across the surface of the star until 18:04 (UT), after sunset, so we can't see the final "emersion" of the walk.

The Observatory of Pamplona, ​​that of Madrid or that of La Hita, in Toledo, are just some of the many centers that will open their doors to the public and that will use their telescopes to broadcast the transit live until the Sun sets.

The sky-live.tv astronomical dissemination channel will broadcast the phenomenon live and, while connecting with the telescopes of the Canary Observatories, will explain what is observed.

For this, it has the help of José Luis Crespo, physicist and creator of QuantumFracture, one of the channels of scientific dissemination on YouTube with more followers (almost two million people) who will talk about exoplanets, cosmology and many other topics together with researchers and astronomers of the Institute of Astrophysics of the Canary Islands (IAC).

To see the live broadcast and news related to this exceptional event, you can directly access the pages enabled for it: https://www.youtube.com/embed/Z6K5EnbNROw on the video channel, and http: // sky-live.tv/retransmisiones/Mercury2019 to see the broadcast of sky-live.tv. EFE text and photo.