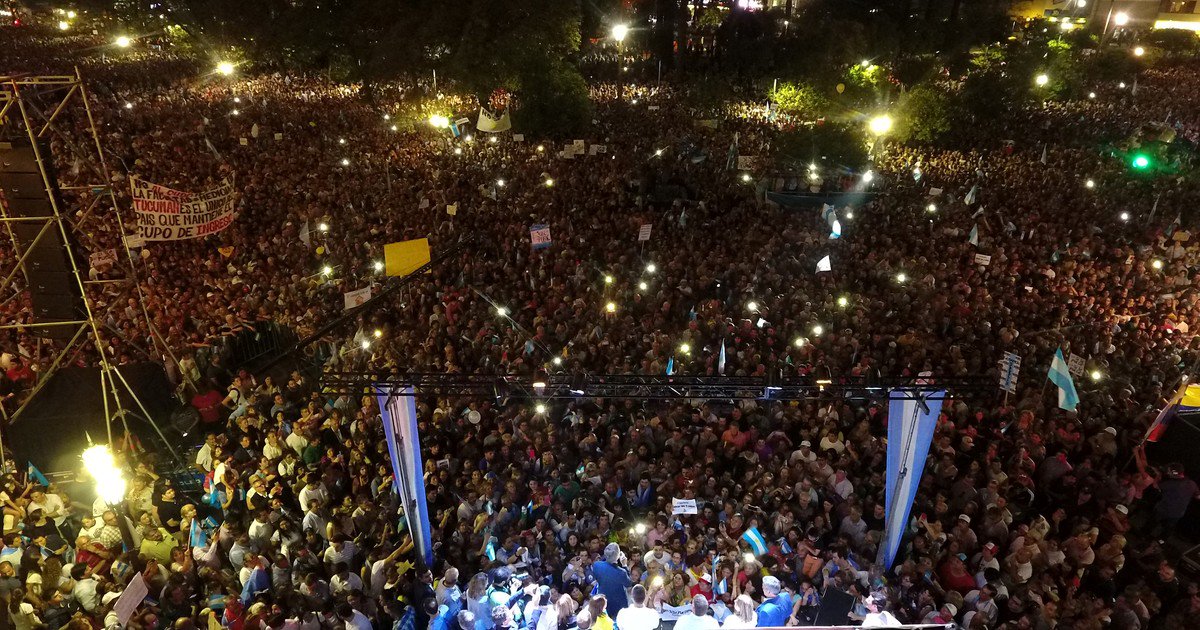 Long before Barack Obama popularized the phrase, the "yes you can" was already the motto of politicians and activists fighting battles that, at the time, seemed impossible to win.

It has been almost a month since President Mauricio Macri announced in Belgrano the series of caravans for 30 cities in the country with which he intends to improve his performance in the elections of October 27, under the same slogan: "Yes you can", taken of the campaign that led Obama to the presidency of the United States.

But that motto, which later adopted social and political movements around the world, was not invented by the Obama campaign. The recognition for using the phrase for the first time is given to a group of Latino farm workers in the United States.

In 1972, César Chávez, a famous activist, was in the middle of a hunger strike in Phoenix, Arizona, protesting a law that prohibited agricultural workers from demonstrating or striking in the harvest season. His health was completely deteriorated, since he had not eaten a single bite for more than twenty days. He couldn't even get out of bed.

At his side were Dolores Huerta, with whom he founded the United Farm Workers Union (UFW) of the United States, and his brother, Richard Chavez.

In a biography written by Jacques E. Levy in 2007, Chavez describes those moments like this: “Whenever we talked about fighting the law, people said:‘ You can't, you can't, you can't. It can not be done'. My brother Richard said that at a meeting at the Wickenburg motel and when it was Dolores' turn, she said: ‘From now on, we are not going to say you can't, we are going to say yes you can’. ”

That day a motto was born that called for protests like those of 2006 in the United States for the rights of immigrants, motivated songs in football matches (Ecuadorian fans have sung that to their national team since Japan 2002), movies (it's the phrase used by cheerleaders in the Disney Channel movie entitled "Yes, you can") and speeches by politicians such as the interim president of Venezuela, Juan Guaido.

Gears yes you can

Touch to explore the data.

The first politician who used it as the official slogan of his campaign was former Colombian president Belisario Betancur in 1982. The "Yes, you can" led Betancur to an unexpected victory.

Betancur had already lost two presidential elections and everyone thought the same thing was going to happen in 1982 but, Betancur won against all odds.

The "Yes you can" really climaxed when it was adopted by Obama in 2004 during his campaign for the United States Senate. Obama's campaign manager at that time, David Axelrod, recalled the time when the "Yes we can" came to the life of the young senator in his book "Believer: My 40 years in politics."

Obama was recording a warning and those were the last three words the script had. These words seemed "very cheesy" to Obama, but his wife, Michelle Obama, assured him that it was not so, and, as Axelrod wrote in his book, "he completely trusted Michelle's instincts." contract, preserving the motto that was going to be our war cry in this and all our future campaigns, ”Axelrod wrote in his book.

But the phrase did not become Obama's characteristic slogan until the 2008 presidential primary, when he delivered it in a speech after losing the New Hampshire elections against former Secretary of State Hillary Clinton.

Adam Hodges, a language professor at the University of Colorado who specializes in the connection of language and politics, told Clarin that Obama decided to introduce that phrase after that defeat to “inspire his followers and tell them that that was not the final "demonstrating that it is a slogan" very inspiring that can be used in those situations ".

“When we face impossible odds, when we have been told that we are not ready or that we should not try or that we cannot do it, generations of Americans have responded with a simple creed that sums up the spirit of a people: yes, it can be done,” Obama exclaimed to 1,500 followers who responded with a simple "yes we can" that filled the auditorium of the school where the candidate was and then led him to win the nomination of the Democratic Party and the presidency of the United States.

In the US, "yes we can" became a symbol of change, as that represented Obama for many.

"American politicians always present themselves as being against the establishment of Washington and want to position themselves as agents of change," Hodges said, adding that perhaps Macri "is trying to prove that he is not only part of what is established, but that he is capable of generating changes as an outsider would. "

Mary Hill, a professor of literature and language at St. Mary’s University in Texas, told Clarin that she is not surprised that other politicians want to use the Obama slogan.

"If in the United States, with its history of structural violence and racism regarding African Americans and other minorities, this phrase may work for President Obama, it could certainly work there," added Hill, who specializes in the relationship between language and power.