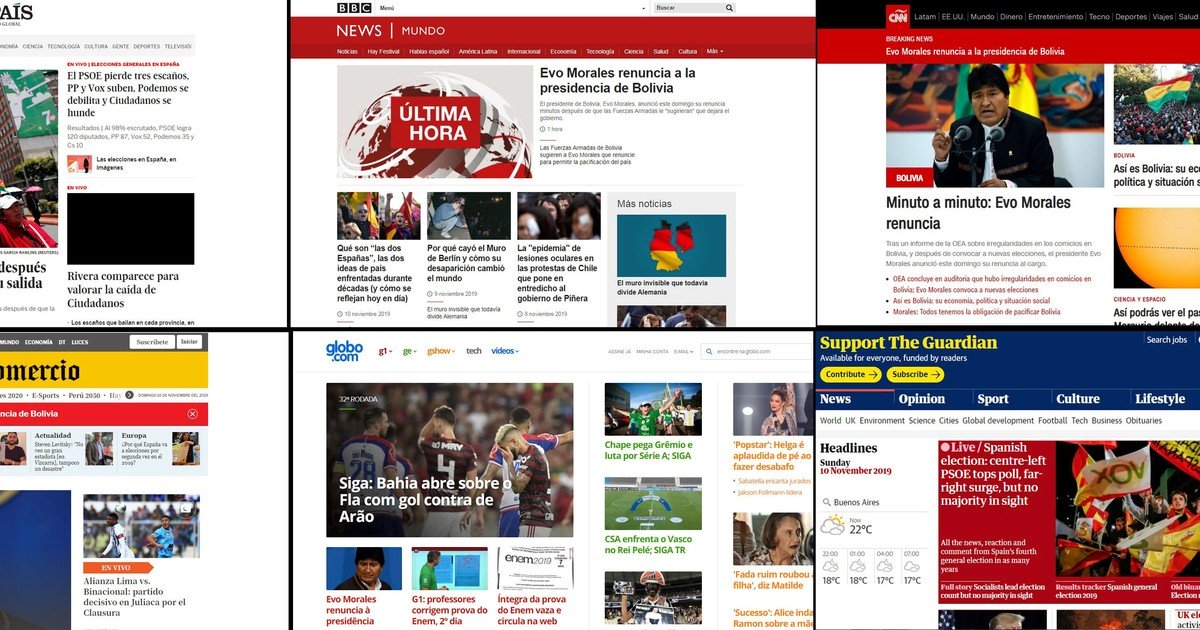 It was the news that shook Sunday and caused some runs in the newsrooms of the world. The resignation of Evo Morales to the presidency of Bolivia became the international theme of the day, so most of the media reflected the information prominently.

The most important Spanish-speaking newspaper, El País de España exposes the news as the most notable both in size and location, with the title "President Evo Morales resigns after the military claimed his departure."

From La Paz, the correspondent describes the panorama of Bolivia: "The South American country faces a power vacuum, following the resignation of the presidents of the Chamber of Deputies and the Senate."

The newspaper El País, from Spain, and the news about the resignation of Evo Morales.

The BBC also echoes Morales's resignation and highlights the head of the former president's complaint about a possible coup d'etat: "There has been a civic, political and police coup," says the English media about the statements of whoever the mandatary.

Meanwhile the CNN is more concise: "Minute by minute: Evo Morales resigns." There is a count of everything that happened in the last hours. With the declarations of Morales and also the request of the Armed Forces and the Police of Bolivia in which they "suggested" the resignation of the then leader. In turn, this news is accompanied by another article in which they tell their readers what Bolivia is like "its economy, politics and social situation."

The Guardian newspaper has a related article on its cover, although much smaller. In a somewhat lost box among other news, he announces: "The president of Bolivia, Evo Morales, resigns after a dispute over the election result," he says under a note on the weather forecast for the United Kingdom.

In South America the situation is different. In this region of the planet is, for everyone, the main news of the day. The Commerce of Peru has four articles on the departure of Evo. Among them one of analysis: "How did the economy of Bolivia do during your term?"

In O Globo, from Brazil, the main title is about a phrase by Brazilian President Jair Bolsonaro, referring to Morales's resignation: "The word coup is used when the left loses," he says in an interview with that newspaper and continues: "The word scam is used a lot when you lose your left, right? When you win, it's legitimate. When you lose, it's a hit. I won't go into your narrative there. The left will say there was a hit now.