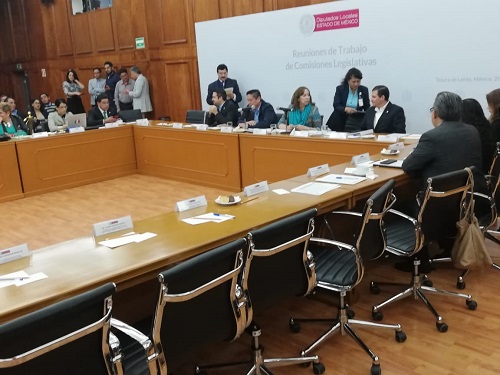 The legislative commissions agreed to reform the Criminal Code of the entity to increase the deprivation of liberty to those who commit robbery in public transport, with penalties of up to 18 years in prison and without the possibility of following the process in freedom because it will be considered a crime serious.

This, after considering that this illicit shows an increase of up to 450 percent and places the entity at the forefront in this fault, where every hour a robbery is committed and in most cases with violence.

It is considered as public transport, in addition to public service, school and tourism, which are also victims of the criminal wave that affects the entity, where more and more violence is used and the most vulnerable population is affected.

The proposal of the deputies José Antonio García García and Brenda Escamilla Sámano of the PAN, establishes the need to spend from 9 to 12 years as a minimum penalty and from 15 to 18 years the maximum to those who commit this illicit.

Meanwhile, the morenista Rosa María Zetina González considered it necessary to modify article 9 of the Criminal Code to expand the catalog of serious crimes and include this activity so that no one who commits robbery aboard public transport can go free on bail.

In the voice of the PAN members, Ingrid Krasopani Schemelensky Castro, said that traveling on public transport generates a great fear of being a victim of crime and being affected in its heritage and integrity, because every hour a robbery is committed in the entity, because agreement to the Secretariat of Security, in the nine months that go of the year 6 thousand 948 robberies have been committed, with which it is located as the entity with more illicit, and with a marked increase compared to 2018, when in the whole year they occurred only 9 thousand 77.

This is serious, he said, if one takes into account that only six out of every 100 are reported, which makes it the problem that most affects Mexicans. According to the Urban Survey conducted by INEGI, 75.8 percent of the population says they feel insecure when traveling in transportation in an entity where more than 3.5 million trips are made.

The legislative committees for the Procuration of Justice, Public Security and Traffic, as well as the Government and Constitutional Points, endorsed the two initiatives that were integrated into a single opinion because of the similarity they have.

At the time, the deputy Carlos Loman said that this will not be enough if preventive actions are not carried out to reduce the incidence, so he called for the application of permanent measures to inhibit crimes.

Meanwhile, PRI Maribel Martínez said her bank agrees to increase the penalty for criminals to receive fair punishment for the wave of robberies registered, especially in the urban areas of the entity.

María Luisa Mendoza Mondragón of the Green Environmental Party considered that this gives the necessary instruments to the institutions to carry out their work. Meanwhile, the morenista Valentín González Bautista questioned that to date the assaults do not reduce despite the existence of video surveillance cameras in dozens of units.