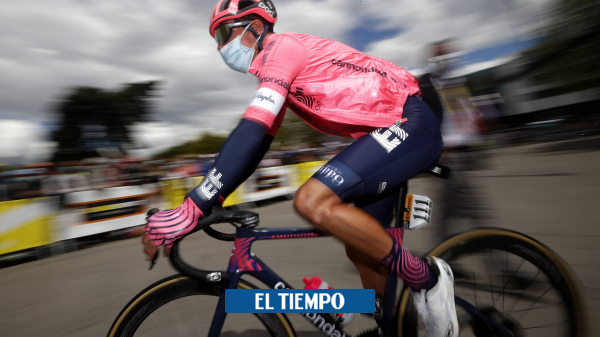 Tadej Pogacar won stage 17 of the Tour de France held this Wednesday between Muret and Saint-Lary-Soulan Col Du Portet, of 178 km, remains the leader and Rigoberto Urán left, for now, the podium.

And it is important because there are three mountain prizes, two from the first category and another from outside, the latter at the finish line.

It may interest you: (Tour de France 2021: this is how the classifications go after stage 17)

The day started well moved. They tried to present escapades. Pierre Roland was one of the first to jump off the lot and reached 30 seconds, but was hit.

Then, the attempt of Lukas Postlberger, Anthony Pérez, Dorian Godon, Anthony Turgis, Danny van Poppel and Maxime Chevalier came to fruition, who maintained a good difference over the main batch.

The interests were many and the teams of the main men of the general were waiting for the first ramps to take care of themselves and try something.

68 km from the finish line, the pointers had an income of 8 min 25 s to the Pogacar group, including Rigoberto Urán, Nairo Quintana, Esteban Chaves.

Nairo attacked. He went through the points of the mountain, next to Wout Poels, when he was promoted to the first prize of the day, but four kilometers later he was captured by the Pogacar lot, in which the UAE Emirates set the pace.

On the penultimate climb of the day, the group pulled by the leader’s team cut the gap over the front lot, with a strong rhythm.

In the fight for the mountain, Poels beats Nairo and remains the leader of this classification.

Pérez and Godon were the survivors of the escape and at the start of the final climb it took the group 3 min 58 s.

Nairo and Sergio Henao could not stand the strong pace of the leader’s team and stayed in the first three kilometers of the climb.

It may interest you: (Nairo can still win the mountain of the Tour de France 2021)

There is no leak. Pogacar sped up and selected the group. The leader remains, Ben ‘Connor, Urán, Jonas Vingegaard and Ríchard Carapaz, what they are. 8 km to the finish line.

Again Pogacar and Urán, Vingegaard and Carapaz hit him, no one else, but the Colombian gave ground and lost the step of the lot.

Sergio Higuita threw a life preserver at Urán, took him, tried to connect him with the Pogacar lot. Vingegaard went to the front, he was interested in keeping Rigoberto Urán away.
Urán left the podium and Vingegaard and Carapaz settled in.

This Thursday there is also a high end. Pau and Luz Ardiden, short, 129 km, with four mountain passes: two fourth and the rest out of category, one of them the Tourmalet, 17 km uphill and average ramps of 7.3 percent incline.

The final climb will be 13 km, with average ramps of 7.4, the last option for climbers.

It may interest you: (Tour de France 2021: Does Urán have options to return to the podium?)