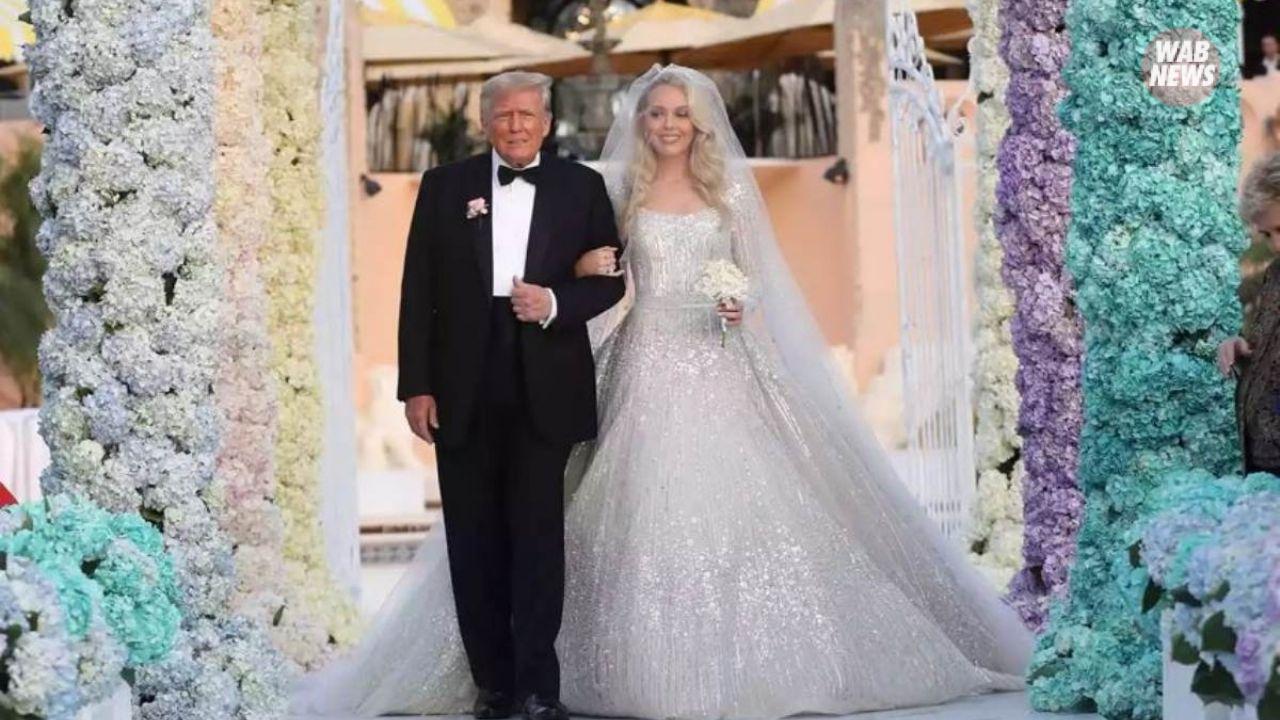 The former president of the United States, Donald Trump, forgot for a few moments about the controversies that have surrounded him in recent months, as well as the results of the midterm elections and enjoyed the happiest day of her fourth daughter, Tiffany, who married billionaire, Michael Boulos. The lavish wedding, held at the ostentatious family mansion in Palm Beach, Florida, was attended by 500 guests who shared with the happy couple.

Proudly, Trump walked arm in arm with his daughter across a white runner, adorned by an archway with hundreds of colorful flowers, and handed Tiffany down the aisle. Once they arrived, the businessman gave his son-in-law a warm hug and the ceremony began, in which they said yes after four years of dating and one or two obstacles. Just before sunset they became husband and wife.

The decoration of Mar-a-Lago (residence valued at 180 million dollars) gave clues that it would be a lavish celebration and that the guests would be entertained, since everything seemed taken from a fairy tale.

Trump delivered his daughter Tiffany at the altar. Photo: special.

Trump He made a toast to his daughter and together they went to the dance floor, where to the rhythm of “Here Comes the Sun” by The Beatles, he showed his love for the 28-year-old. The video quickly went viral, showing another facet of the former president.

“Michael, you better take care of her. You are just two spectacular people and this was a beautiful day,” Trump told his son-in-law.

Tiffany was joined by all of her siblings – Donald Trump Jr., Eric Trump, Barron Trump, and Ivanka Trump – at their beautiful wedding. On several occasions she could see the closeness she has with Ivanka, who was also her maid of honor and she was aware that her half-sister looked spectacular on the most important day, because she could see arranging her veil.

According to Marla Maples, Tiffany’s mother, her daughter chose the residence to celebrate her wedding because she grew up there. Despite having been divorced from the businessman for several years, the woman did not hesitate to photograph herself with her ex-husband and his current wife, Melania Trump.

Donald Trump’s grandchildren were pages and bridesmaids at the exclusive and luxurious ceremony.

The decoration was not the only ostentatious and spectacular thing about the wedding. The bride, her mother and her sister Ivanka were dressed by Lebanese designer Elie Saab. Tiffany a semi-transparent long-sleeved dress encrusted with diamonds and a long train, a veil and dangling pearl and diamond earrings.

For the party, the newlywed changed her look and chose a white dress with a sweetheart neckline and bare shoulders, which she combined with a striking diamond necklace.

Ivanka, being a bridesmaid, had to wear a dress of the same color as the others, yes, of free choice in design, so she chose a Greek-style one.

The Trump couple also looked sublime, the former president, like most of the male guests, wore a black tuxedo, while Melania opted for a peach-colored dress.

The newlyweds opened the dance floor with the song “Dancing in the moonlight” by Toploader, local media reported.

Tiffany and Michael Boulos met in Mykonos in the summer of 2018, and have since become inseparable. With a ring worth millions of dollars, the 28-year-old billionaire proposed to the lawyer in 2021.

Will Trump return to Twitter? Elon Musk finally breaks the silence and this is what he said

Trump: The US built nuclear weapons that Putin and Xi Jinping have seen in their lives

“It Was a Joke,” Says Trump About Wall Construction In Colorado