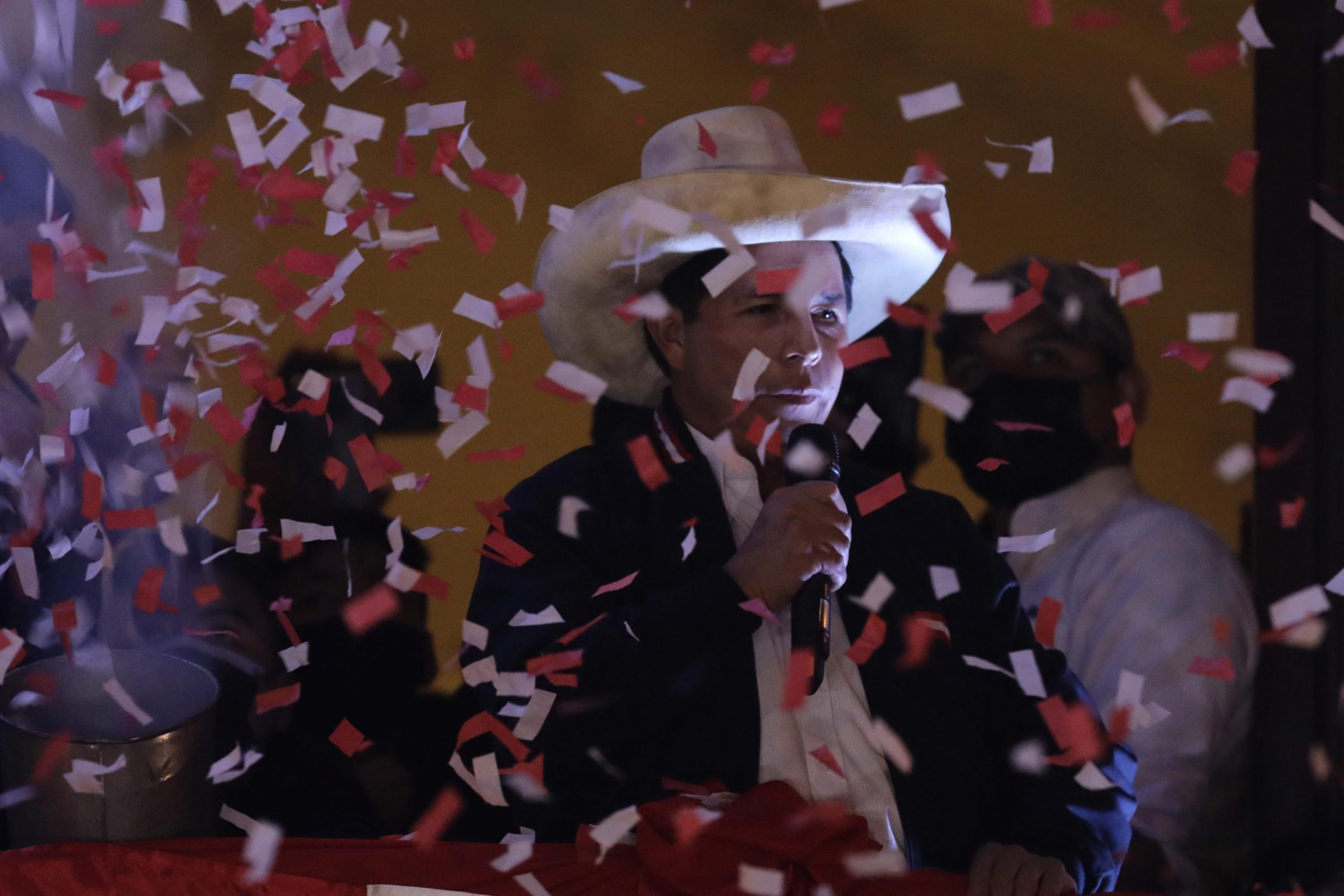 LIMA (AP) – Pedro Castillo will govern Peru from July 28 and will receive a country with a third of the population living in poverty, although hopeful in fulfilling its promises of change. However, he will not have a majority in Congress and power groups and investors look at him with distrust.

The 51-year-old leftist professor told his supporters yesterday that his term will be “inclusive, fair and free.” Last week he commented that “he will prioritize growth that does not depart from social development and the reconquest of labor, ecological, social and economic rights.”

Due to the economic impact of the new coronavirus, a third of the country is poor and about 10 million live on $ 98 a month, according to official figures. Millions of jobs have also been lost and thousands of small and medium-sized businesses have gone bankrupt.

It is not known who will direct key institutions for investors, such as the Ministry of Economy or the Central Bank, whose president Julio Velarde has directed the entity for more than 14 years and has said a few weeks ago that “he is going to think about” Castillo’s proposal. to continue in office.

The businessmen do not know the president-elect and look at him with distrust. Oscar Caipó, president of the most important union of businessmen in Peru, told the public television station that to continue growing, “investment is needed, which requires stability, trust and the rule of law.”

Unlike the former presidents of Bolivia, Evo Morales, and Venezuela, Hugo Chávez, who had broad support in the Legislature for his efforts, Castillo arrives weak. He does not even lead the legislators of the Peru Libre party, for which he was elected, because he is a guest in that group.

The founder of Peru Libre is the Marxist neurosurgeon Vladimir Cerrón, who is serving a four-year prison sentence for corruption while he was governor in 2019. Although Castillo has mentioned several times that in his administration to Cerrón “they will not see him or even as a goalkeeper ”, the doctor trained in Cuba is active on social networks and controls his party.

Analysts say that the first thing Castillo must avoid is being removed from office in a country where there have been four presidents since 2016. To remain in office, the professor must secure at least 44 votes from the 130 members of the unicameral congress. Peru Libre obtained 37 seats and if Castillo approaches the center, he could get seven key votes from other parties.

Once his seat is secured, Castillo must fulfill his promise of “no more poor in a rich country” that caused an avalanche of votes, especially in rural areas of the country and among the poor. The president-elect, who has no experience in managing public affairs, but has developed skills as a teacher union leader, has promised that his government will be inclusive.

“We call on the Afro, Coastal, Andean and Amazonian peoples, the working class and their unions, the native and peasant communities to make this homeland beautiful,” Castillo wrote on Twitter yesterday. Castillo’s wife, Lilia Paredes, told The Associated Press “that her husband is not going to disappoint” Peruvians. “And I know that he will achieve it because I know him,” he said.

Keeping his main promises could add popular support to him in a country with presidents characterized by forgetting their proposals for the underprivileged as soon as they were elected.

The uncertainty about who would be the new president of Peru after the accusations of fraud without evidence of the losing candidate Keiko Fujimori, have reduced to just one week the usual month of time that an elected president has to conform his cabinet before assuming power. . Castillo will have no rest because Fujimori, who has 24 parliamentarians and another 25 possible legislators allied with right-wing parties, reluctantly accepted the professor’s “illegitimate” victory and predicted, without giving details, that his victory “will have serious consequences for our country.”

After losing, Fujimori risks her freedom in an upcoming trial after a prosecutor in March asked to send her to jail for 30 years after accusing her of laundering money received for her previous presidential campaigns in 2011 and 2016, in which she was also defeated.

One of the first battles Castillo will face is his desire to change the Constitution promulgated in 1993 by Keiko Fujimori’s father, former President Alberto Fujimori (1990-2000) sentenced to prison for crimes of corruption and for the murder of 25 Peruvians. Fujimori affirms that Castillo seeks to destroy the current constitution “to take power definitively.” The president-elect has denied that possibility and has asked Fujimori not to put up “more obstacles to move this country forward.”