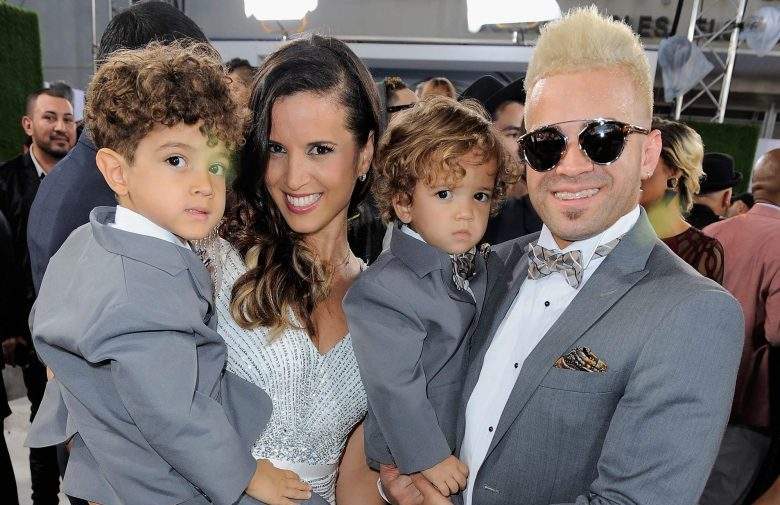 Nacho, his wife Inger De Vera and his children,

Venezuelan singer Miguel Ignacio Mendoza, known as Nacho, confirmed that he separated from his wife Inger Mendoza on Instagram after strong rumors on social networks.

“We are still together as a family, even if we are not together as a couple,” said the Venezuelan singer in a video he published with his wife and children.

The artist’s message comes amid the rumors of an affair with Venezuelan television animator Melany Mille. However, he said the reason was not for third parties in their marriage.

In the face of strong criticism, the Venezuelan singer made a powerful comment: “Detractors must have a disaster that they have to correct”

On his ex-partner Inger Mendoza “Nacho” said they only have a working relationship, so they will see it with her. “A family does not make kisses,” he said in reference to the love for their children.

According to the video that the interpreter uploaded, he says there are no third parties in discord and will continue together. Nacho decided to give the news of his own mouth to avoid speculation about his separation.

Speculations about the couple ended up being true

The first thing that was seen in the middle of this supposed break, and for which the rumors began, was that Inger Mendoza removed the phrase “Nacho’s Wife” from her Instagram biography, leaving only that she is “mother of three migueles”.

In addition, for several months the Venezuelan couple had not been seen in any outing or publishing photos together. In fact, the last publication as a family is in the account of the dancer and was made on July 5 of this year.

It was also confirmed that they unfollowed each other on Instagram, disappearing completely from their list of followers. In addition, they have deleted several publications in which they were appreciated as what they were, one of the most stable entertainment couples. “We are a family because we love each other, we respect each other,” said the artist.

The news caused a stir in social networks and the comments made us wait.

“Nacho, you don’t have to give explanations to anyone, your relationship with your children and your wife, it doesn’t matter to anyone but you. It’s your life, ”wrote an Internet user.

Remembering a bit, the singer – who usually does not like to air his private life – dressed as a prince to dedicate heartfelt words to his then-girlfriend in 2013, Inger Devera, kneeling by offering him an engagement ring. He even recognized his lies and infidelities with a broken voice, and then offered a few words of love. In 2014 they contracted nuptials.

“What a shame they were a very nice family and the truth is that his wife there is as quiet as he does not feel happy to be friends with his partner now, but good relationship of potatoes seems very good although Nacho looks a bit rude, but good Every family and every relationship is different, ”said another person.

After the break several names have emerged one of them from the Venezuelan television cheerleader Melany Millie, with whom the interpreter has been seen several times.

Press reports indicate that the beautiful TV host could have more than a friendship with Nacho, but she says they are just friends.

“Nacho told me to be his guest at the event, that’s all,” he said.
on October 10 because this extended the invitation to attend the event.

“Nothing momentous, that’s why we sat together,” he said.
On the other hand, the journalist also confessed that she is in a love relationship, but that her heart is “protected.” “I have love. My heart is excited, but protected, ”he said.

In addition, the girl stressed that she has no plans to leave Venezuela because she is recording the novel “Intrigue behind the camera.” He added that he has not accepted opportunities outside the borders because the country “is his priority.” “My country is one of my priorities, beyond all opportunities outside its borders,” he said.

It is worth mentioning that on September 16 Millie said that she was invited by Nacho to her concert in Bogotá, Colombia, because she could be the protagonist of one of her music videos.

In addition, at the Pepsi Music Awards 2019, they were also together, even getting caught by the camera on a couple of occasions, while she took out an eyelash.

After that event, criticisms of Melany Mille increased. Some fans called her “home breaker”; and finally the presenter talked about what happened with the interpreter of “Mambo for the haters”.

As recalled, Nacho and his still wife Inger Mendoza got engaged in Disney six years ago and since then they both showed themselves as a solid couple. However, following recent events, Inger removed the phrase “Nacho’s wife” from their social networks.

Eli Tulián “the other possible candidate”

The former member of the duo “Chino and Nacho” has generated hundreds of speculation about a possible infidelity to his wife, also Venezuelan Inger Mendoza, because he shared on his Instagram account, several photographs with the Miss Miss World Spain 2017, Eli Tulian

The 23-year-old model also shared on her Instagram account, a series of photographs with the interpreter of “My beautiful girl” so that her thousands of followers say that both have a relationship beyond work. As Eli Tulián stars in the video of Nacho’s latest musical premiere, F.O.K. Friends

ROMANCE IN EUROPE. If they hadn’t found out, the Intro track of my album “UNO” is called “F.O.K Friends.” “F.O.K Friends” is the first song on the album and is the first video in a series of 6 videos, which together, form a single story with a beginning and end starring the international model and actress Eli Tulián; six songs of the twenty-one of the album that merged perfectly helped us to generate the story of a romance in Europe. The idea was that all the videos come out at the same time and trigger the controversy of “who is the girl who repeats prominence in so many videos of Nacho’s album and why the moments look so authentic? Romance in Europe? ”The timing was perfect because it coincided with the months of my tour in the old continent and it would have seemed that the protagonist accompanied me throughout that period of time, but the plan changed when we started postponing the album’s release ( I still do not have a definite date) for permission issues in the collaborations, especially if the colleague is part of another record house, percentage divisions in terms of authorship and other legalities that still absorb us a lot of time during the day. The first song that we revealed was “FOK Friends” and still need to be published: “For You Never Forget Me,” “What’s More,” “Evils,” “Bandit Heart” and “My Life” so they can see the complete saga of the whole story we work on. We came up with the acronym “F.O.K” for the theme intro because of the double meaning it generates, but the real meaning is “Forever Only Known” as Friends. The producers and co-authors of this rola were @yeramusic and the @trapicalminds of Colombia. We hope you enjoy this project to which we put all our heart. Subscribe to my YouTube channel #NACHO and search for the video or listen to the song through your favorite digital platform.

“ROMANCE IN EUROPE. If they hadn’t found out, the Intro track of my album “UNO” is called “F.O.K Friends.” “F.O.K Friends” is the first song on the album and is the first video in a series of 6 videos, which together, form a single story with a beginning and ending starring the international model and actress Eli Tulián. ”

After the constant publications that Nacho and the model have been sharing on Instagram, they say that the singer’s wife stopped following him on the aforementioned social network, but the model denied in an interview on the program “Al Rojo Vivo” with María Celeste You will have a romantic relationship and less responsible for the breakup of the Venezuelan marriage. Who will be your new “Pretty Girl?